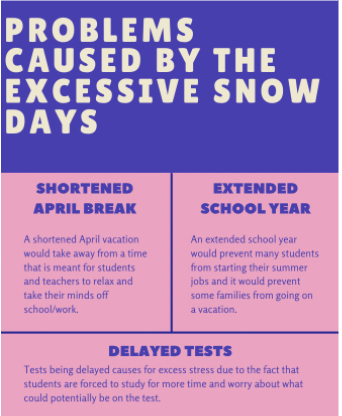 A few of the ways the excessive amount of snow days has been affecting students and teachers.

Waking up on a school day and seeing snow outside my window generally sparks excitement because it means there could be no school; however, this year I was disappointed with the fact that there were so many “snow days” when there was actually no snow on the ground.

Throughout the 2021-2022 school year, Staples had five snow days with the potential of there being more through the coming months. As we have more days off, they will eventually contribute to added school days at the end of the school year or take away from the April break which stops many students from starting their summer jobs or taking an extended break from schoolwork.

A result of these days off, tests, which are considered to be the most stressful part of most student’s lives according to Oxford Learning, may be delayed due to the constant snow days. These delayed exams also cause a large amount of testing anxiety which is a condition that almost 20% of students suffer from according to the Washington Post. These anxieties on average cause grades to drop a half letter grade.

A potential way to solve the issues caused by having too many snow days would be to swap snow days with online learning days, with school only being canceled if teachers are not able to teach virtually. This method would make it so the school doesn’t have to worry about transportation to and from school. The student’s school year would also not be extended more than it already has been and tests most likely would not be delayed resulting in less stress for students.

So, in the future, the school should continue to invest in programs like Zoom or Google Meet so there is always a backup to use if a school day is canceled.

A limit on the number of snow days allowed should be implemented and once the limit is reached, school should be moved to an online setting.