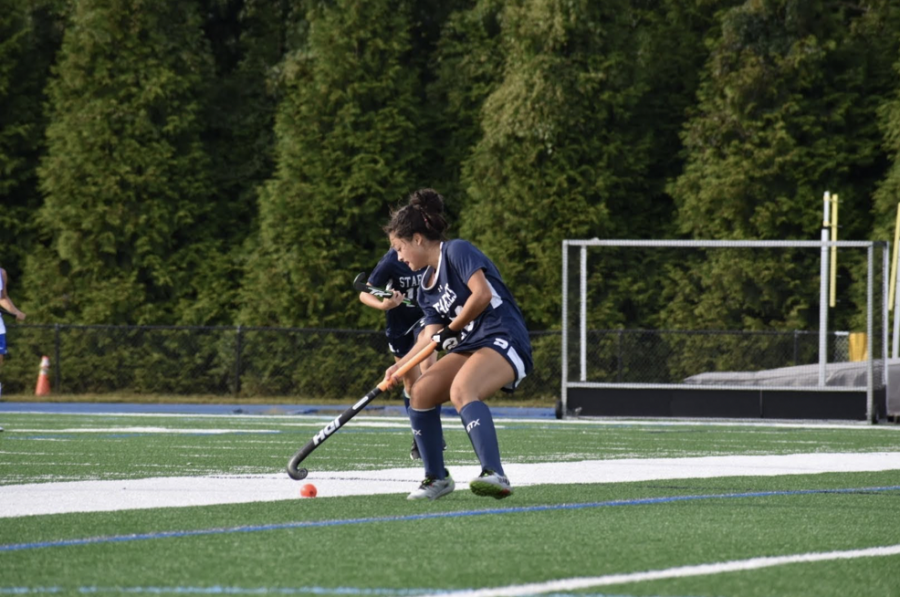 Scoring five goals in her first two games on the Staples field hockey team, Tyla Ozgen ’25 has proven that she is a crucial element to the team’s success.

Ozgen entered the world of field hockey five years ago because her friends were playing. Because of this, the sport quickly became a huge part of her life.

“A lot of my friends were playing, and then I thought why not just try it out and see what happens,” Ozgen said. “And then I just fell in love with the sport ever since then.”

After playing just two games for the Staples team and leading them to victory over Norwalk and Branford, Ozgen went on to win the Ruden Report-Fairfield County Bank player of the week. But, even with so much to show off, Ozgen has remained humble.

“[Winning player of the week] definitely motivated me to do more, but I wouldn’t have been able to do it without my teammates and my coaches,” Ozgen said.

Though she is modest about her talent, captain Ava Ekhadot ’22 recognizes Ozgen’s skill and determination. Ekhadot is not surprised by Ozgen’s effort as she had seen her play many times before becoming part of the team.

“I haven’t been surprised by the effort that Tyla puts in,” Ekhadot said. “I’ve seen her play many, many times before she joined the team, and I have always noticed that she was such a hard-working player and that she always wanted to improve.”

Ozgen has scored many vital goals for the team, including the only goal when Staples was defeated by Darien 2-1.

“Tyla has had a tremendous impact on the team,” Ekhadot said. “She has scored so many goals for us as a team, and she has so many amazing stick skills.”

As anyone would be about joining a new team, Ozgen was a little nervous, but she quickly realized that a major part of being on the Staples team is her connections with her teammates. Right from the start, she noticed the other players and upperclassmen were welcoming and kind to her and the other freshmen.

“I was a little bit nervous [about joining the team] being a freshman,” Ozgen said. “But honestly, all the captains and all the upperclassmen made such a big effort to make all the freshmen feel welcome.”

Ozgen fits right into the team with her cheerful personality.

“The biggest impact she’s had on our team is the positivity that she brings to the field,” Ekhadot said. “She’s always so excited to be there and is so nice, kind and positive to all her teammates.”

Ozgen has an outgoing and friendly personality that fits right into the dynamic of the Staples field hockey team. Though she may have crazy talent that drew the eyes of her captains, she continues to recognize her teammates’ help and support in getting her to where she is today.

“We are all so close,” Ozgen said, “and I wouldn’t be able to be in the places that I am without them.”