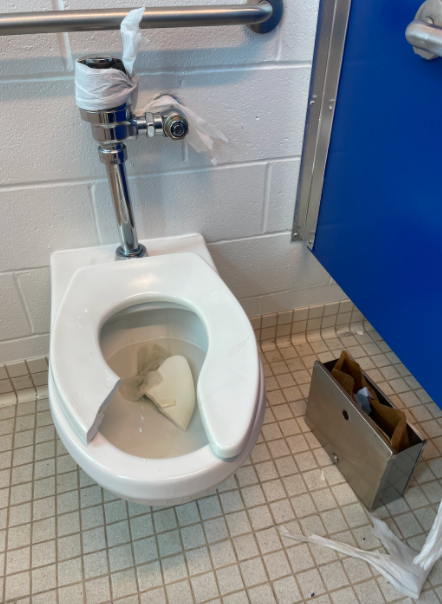 The girls second floor bathroom was vandalized on Sept. 23. The perpetrator(s), who has not yet been identified, peeled paint off the stall walls, broke the toilet seat and drew a sexually explicit image on the stall door.

The second-floor girls bathroom was reported vandalized on Sept. 23. A piece of the toilet seat was broken off and thrown into the toilet, paint was peeled off the stall and spread across the floor and inappropriate messages were drawn on the stall door. The perpetrator(s) has not been found.

“The janitors have to put in so much [extra work],” Laila Latzman ’24 said. “The school should make an announcement about how disrespectful [the vandalism] is. Whoever does it again needs to face consequences.”

The bathroom was cleaned and repaired the following day. According to Principal Stafford Thomas Jr., administration is currently reviewing surveillance footage in order to identify the perpetrator(s).

“To destroy any school property is just something that is—it’s disturbing,” Thomas said. “This is our school. This is our home during the day. Why would you do that?”