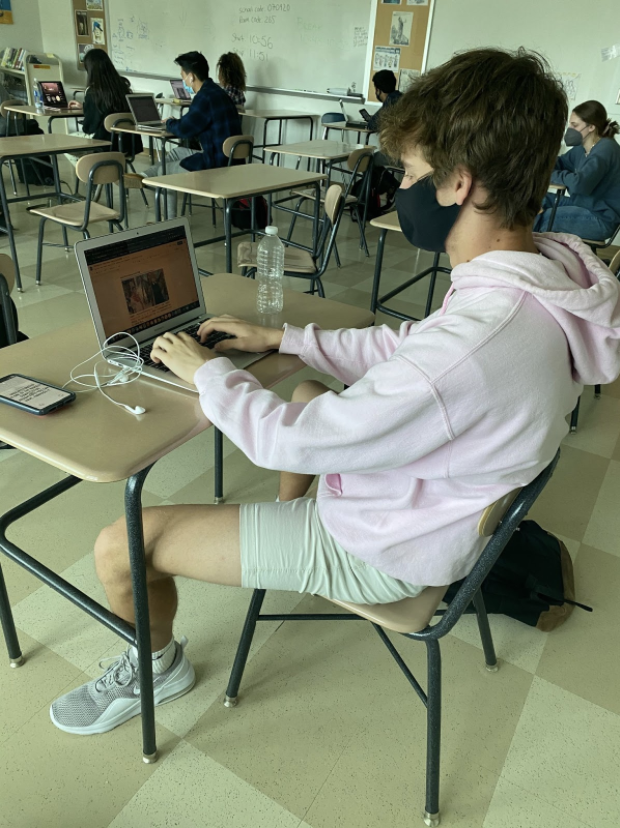 Eli Shorrock ’22 enjoys the new schedule format because he can get more work done during class time. Although, sometimes he gets antsy during the long periods.

In a year that has consisted of constant changes, students have adopted some and neglected others. The block schedule at Staples has been a change that some students and teachers have seen as a positive and some as a negative.  I strongly believe that the block schedule is a more strategic way of learning than the block schedule.

Last year if someone told me I had 1 hour and 20 minute class, I would be in disbelief and annoyance. As someone who struggles to focus for more than a short period of time, the block schedule has forced me to train myself how to. Now as this year is coming to an end I feel my attention span has lengthened and work habits have strengthened.

I have heard many students and teachers complain because they are only going to a certain class two to three times a week as opposed to five. While changing to this block schedule may have been hard this year, I have noticed that the 120 minute classes allow for teachers and students alike to  accomplish much more work per class.

This new block schedule also limits the amount of homework that students need to work each night and that teachers need to assign as there are only four classes a day, instead of seven. This year’s schedule has balanced out students’ schedules allowing them to give all their attention to four classes and their homework each day as opposed to seven.

Changing back to the rotating schedule and having four to five periods of each class a week could lead to getting easily overworked by a class. The block schedule makes it exciting and refreshing to come to each class since we only have it two to three times each week.

The current schedule is positive for both students and teachers. It creates an atmosphere where everyone values the class period because they are infrequent each week.

When commenting on the social aspect of this block period set up, I feel that, although you may not meet with these classes/teachers on a daily occurrence, it is still possible to create the bonds that you make in a rotating schedule. Despite having less time in the physical classroom, some of my classmates and teachers that I have met this year are people that I have made a strong relationship with.

The new block schedule has also created a “flex time.” Flex time this whole year has been a time where students could meet one on one with a teacher. It has also been a time when clubs can meet as a group. If we change back to the rotating schedule it will eliminate this useful time.

Changing back to the rotating schedule will make it so teachers and students will have to change what they have just adjusted and thrived in, causing an overall disruption of the academic process of all Staples students and staff.