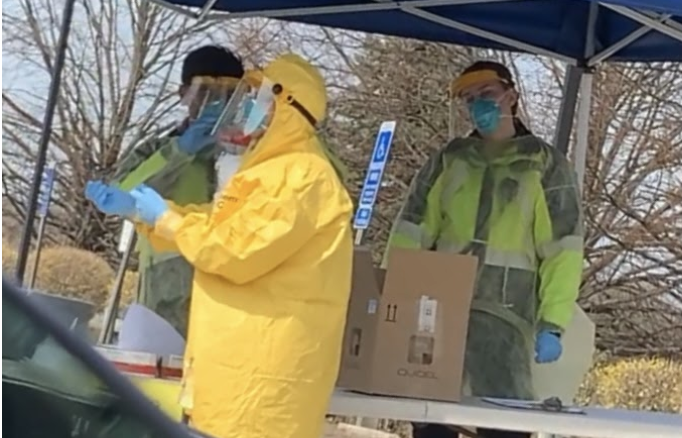 On March 18, 2020, almost two weeks after the party where my family contracted Covid-19, my family and I were able to get our first Covid-19 tests at a drive through testing center at Bedford Middle School.

In March 2020 my whole family got sick and a few days later we learned that we had all been in contact with a Covid-19 positive friend at a birthday party, featured in New York Times. The party was on March 5 when Covid-19 was beginning to appear in America, despite there being no reported cases in Connecticut. The first case of Covid-19 in Connecticut was on March 8. We quarantined and got tested as soon as possible (no places nearby had Covid-19 tests yet) and learned we were positive. It was obvious that my family and I were positive due to the fact that we were all experiencing symptoms of Covid-19.

As soon as we realized we were sick with Covid-19, my first instinct was to hide it and not tell anyone except the people I had been in contact with. It felt like a sin and I didn’t want anyone blaming me. After a day of being at home, I began to ask, blaming me for what? I didn’t do anything wrong; I got a virus. My actions had been no different than anyone who would have gotten a cold or the flu in any other year.

Most town members were very sincere and helpful by bringing food to our door and asking if we were okay. But others were not so pleasant. Many town residents and local news outlets began creating false rumors, like making claims that the party had 200 guests and that children were in the ICU. People liked to play the blame game and often forgot that all these community members were in bed severely sick with a mysterious virus no one knew anything about.

As it’s been over a year since March, the stigma against having Covid-19 has only grown. I think the stigma is so large because of the severity of contact tracing. If one person gets it then everyone who was with them has to quarantine.

Even worse, coming in contact with a Covid-19 positive person can put you at risk of becoming very sick or, by extension, getting an older family member sick. Many people are scared, for good reason, and don’t know how to handle the news of being in contact with someone who is positive so their reaction can come off as rude or angry.

It’s important that our community stays understanding and calm in such crazy times. If someone tests positive for Covid-19, they shouldn’t have to hide anything in fear of being criticized or embarrassed. Hiding a positive test result would make things far worse, leading to even more people getting sick and false information being spread.

The blame game is getting boring, and why does it matter “who had it first?” The most important thing is the person’s health and the people they were with are notified. There are more important things than who received the virus first. The stigma against getting Covid-19 must be abandoned for concern of our community’s well-being.