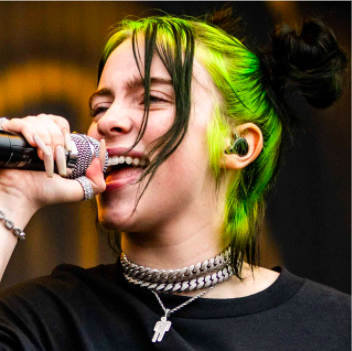 Billie Eilish performs at the music festival Pukkelpop in 2019.

“Billie Eilish: The World’s A Little Blurry”, released Feb. 26 on Apple TV+, reveals the young artist’s highs and lows as she navigates the music industry. The two hour and 20 minute documentary is rated R and is recommended for mature audiences only.

Eilish released her first song “Ocean Eyes” at just 13 years old and has grown rapidly since then. The documentary takes the viewer through her life from age 16 to 18, and we get to see her growth as an artist and a person.

Throughout the documentary, we get to see her hectic life on tour. Eilish discusses the hate she receives and the feeling of always having to be perfect for the media. On tour, she got injured emotionally and physically, but she ended up winning five Grammys after being nominated for six from all her hard work.

People often wonder where her talent and love of music came from. Eilish says that it came from her family. In the documentary, there are clips from Eilish’s childhood of her creating music with her family and performing in talent shows. Her father taught her how to play the piano and the ukulele, and her mother taught her how to write songs. Eilish and her brother, Finneas, write songs together in their childhood home. She doesn’t particularly enjoy song writing, but she draws her ideas out in a sketchbook, and Finneas helps them come to life.

The songs that Eilish writes are often described as unhappy. This is because she writes about the way she is feeling, and most of the time that feeling is sadness. She writes about topics that other artists tend to avoid which include depression, anxiety, self harm, etc. When teenagers struggling with these issues hear someone famous talking about them, they feel heard and understood.

Overall, I would rate this documentary a four out of five because the message was impactful, and it gave me more insight to how Eilish actually creates her music. However, it was a little too long.