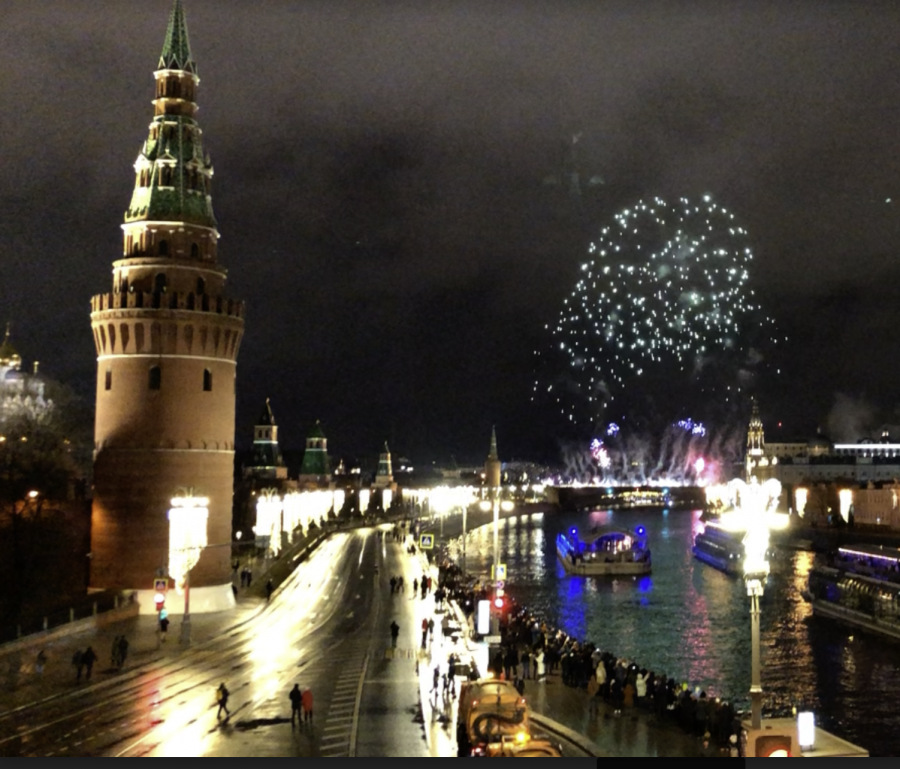 As New Years is a very significant part of Russian culture, fireworks could be heard for many nights after the holiday.

Flying home from my New Year’s trip to Moscow, I reflected on my experience traveling to a distant city that has always been on the top of my bucket list. As with everyone that travels to a new country, I had my stereotypes and preconceived notions of what Moscow–and Russia in general–would be like.

I envisioned extreme cold (I wasn’t wrong), tall brutalist and bland soviet-style apartment buildings (they’re everywhere), and a censored culture and unfamiliar foreign vibes in general. After all, I travelled to China last summer and experienced the censorship of its society and the reality of a digital police state. This contributed to my assumption that Russia would be more or less the same; cut off from the rest of the world with a feeling that you’re always being watched.

However, looking out the window while our plane was docking at Moscow’s Sheremetyevo International Airport, I could see an American hotel, and things started to appear familiar. In fact, I saw many American businesses across Moscow, such as our all too famous McDonalds with its name written in Cyrillic. In America, we have been raised to believe our political adversaries are our polar opposites; incompatible with our way of life. While this may be true in terms of government and its functions, this perspective has been cultivated by the Cold War mentality’s affect on American entertainment among many other factors. This way of thinking has produced a dominant American perspective of Russia among those who have never been.

Case in point: I grew up watching James Bond films where several of the movies were centered around Cold War politics and British spy James Bond’s covert operations in the Soviet Union. I distinctly remember the strictly communist, bleak and monotonous feeling those movies attributed to life in the USSR.

While the Soviet Union doesn’t exist anymore, our entertainment among other factors have shaped our view of not just Russia, but of all of our adversaries. I believe this has definitely influenced how Americans not only think, but act in respect to our relationships with these nations.

My time in Moscow taught me that despite the lack of liberty, life seemed normal there, almost as if I was in New York. The people may speak a different language, but they pursue the same goals, work the same jobs and eat many of the same foods.

In spite of this similarity, one contrast is very stark: Moscow is not a reflection of the rest of Russia; it is a city of concentrated wealth. While the Moscow government generates a great deal of tax revenue from its wealthy citizens, the vast majority of the rest of Russia is underdeveloped and lives in extreme poverty.

However, my time in China and Russia has enabled me to dive into these cultures, meet their people, and discover who their people really are. I learned that while our governments and political structures don’t align, we cannot overlook the people of our adversaries; regular people are often not properly represented by their governments–they’re people just like you and I.

I believe that despite our political relationships with these countries, our differences in government, in history and in culture, it is ever more important for Americans and our students to travel and open their eyes to those across the aisle.

Nonetheless, this doesn’t mean that we should be naïve to our adversaries’ issues. There are fundamental and indispensable problems with Russia and China’s governments, societies and political structures and these issues need to be confronted. The sad reality is that these countries are not free; liberty is not ingrained in their national foundations.

As the world becomes further intertwined, the relationship between the United States, Russia, China and our other adversaries will continue to become ever more important. Through travelling and seeing our adversaries, we can educate ourselves as to who the people of these nations really are.

Education and exposure is the only way forward to connect ourselves rather than push away the people of our adversaries. Developing our perspectives is the only way to tackle the serious challenges we face not just in 2020, but for years to come.