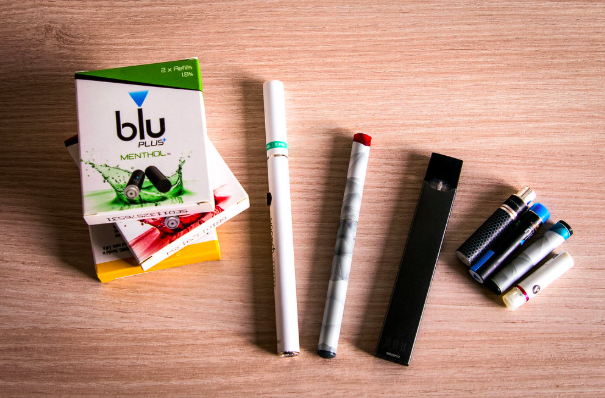 This image, providing various popular vaping devices, shows only a small scale of the products on the market.

The Trump Administration addressed the growing health concerns of teenage use of e-cigarettes after a recent increase in teens with respiratory related illnesses has been linked to vaping and five recent deaths of adult e-cigarette consumers.

This prompted the U.S. Center for Disease Control to release a statement suggesting “while this investigation is ongoing, people should consider not using e-cigarette products.”

The Trump Administration is considering banning flavored e-cigarette products because they are thought to appeal to new nicotine users and teens specifically. Evidence of this can even be presented at Staples High School, as smoking e-cigarettes and other devices has been an issue addressed at the school.

“I’ve walked in to other students using a JUUL or other forms of nicotine in the bathroom before,” staples student Nina Udell ’20 shares. “But using nicotine products has always been illegal or banned for teenagers and people our age, so I am not sure how banning flavored nicotine products is going to work out because it seems kids always find some way around it. I guess banning it will be a step in the right direction.”

While vaping excessively may be a health risk, e-cigarettes were designed and have been proven to help break the habit for those addicted to traditional tobacco cigarettes.

However, the issue is that people are vaping as a new habit, rather than using it to break an old one. And the biggest target audience of new users, many argue, are teenagers. Critics point out that the fun and fruity flavors are designed to draw in new and young users, not satisfy the craving of those who are trying to quit traditional, nicotine flavored cigarettes.

States such as San Francisco and Michigan addressed this problem by outlawing or limiting the sale of e-cigarettes.
It remains to be seen what the CDC investigation will find about the link between vaping and health problems or if the Federal Drug Administration, which has so far allowed the sale of e-cigarettes without health and safety testing, will conduct a review.

This limited federal oversight, being instituted by the Trump Administration be a happy medium — so far, some e-cigarette manufacturers seem to support the decision to outlaw or limit flavors, with representatives of Juul saying, “we strongly agree with the need for aggressive category-wide action on flavored products” while noting that non-flavored products can help smokers quit the cigarette habit.