Predicting the fastest two minutes in sports: the Kentucky Derby 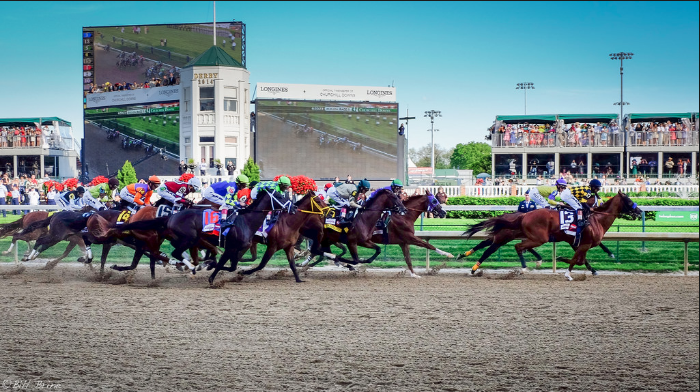 At 6:34 p.m. on Saturday, May 7, 20 horses will leave the gates at the most popular horse race in the United States.
This year is the 142nd Kentucky Derby. It takes place at Churchill Downs in Louisville, Kentucky, and has every year since it began in 1875. The course is a mile and a quarter long, and the record fastest horse to complete the race was Secretariat in 1973.
Melissa Exner ’17, an avid horseback rider, enjoys the popularity of the race.“I really like the appreciation for the horses and the atmosphere the race brings,” Exner said.
Isabella Didio ’18, feels similarly to Exner. “I like that even though not many people know about horseback riding or horse racing, they still watch it because there is so much excitement surrounding the race,” Didio said.
According to the Kentucky Derby website, the 20 horses racing in the Kentucky Derby must travel along the Road to the Kentucky Derby to qualify—a series of 35 races taking place across the country and the world. Points are awarded to the top 4 horses in each of those races, and the 20 horses with the most points earn a spot in the Kentucky Derby race. The Kentucky Derby winning purse is $2 million.
Michaela Pritchett ’19 is an avid horseback rider who likes the new perspective of horses she gets from watching the sport. “I like watching the horses go as fast they can because [in] what I do you only [can] go [a] medium speed, so it’s interesting to watch them going fast versus slow,” Pritchett said.
Last year was one of the most significant years in horse racing history, as American Pharaoh won the Triple Crown and the Breeders Cup—becoming the first horse to win all four races and the first horse to win the Triple Crown since 1978.
American Pharoah’s jockey, Victor Espinoza, is riding in the race yet again this year, but aboard a different horse. Espinoza is trying to win a record three derbies in a row, and was given a choice of who he would like to race. Espinoza will be racing the number 10 horse, Whitmore, trained by Ron Moquett.
Ben Kanter ’16 is excited to see Espinoza race another horse. “It’ll be interesting to see if he is able to pull off another win but on a different horse.”
Other than Espinoza’s ride Whitmore, there are 19 other horses: Trojan Nation, Suddenbreakingnews, Creator, Mo Tom, Gun Runner, My Man Sam, Oscar Nominated, Lani, Destin, Exaggerator, Tom’s Ready, Nyquist, Mohaymen, Outwork, Shagaf, Mor Spirit, Majesto, Brody’s Cause and Danzing Candy.
Nyquist has the best odds to win the race, at three to one. He has been undefeated at his last seven races, and was the two year old champion. The horse with the second best odds is Creator, at eight to one, but he seems to compete best when the track is wet. Last in the top three is Mohaymen, at ten to one. He has only lost one race.
Regardless of your understanding of horse racing, the Kentucky Derby is a fun event for everyone to watch together. “It’s a fun excuse for [my family] to all see each other,” Seren Becker ’19 said.