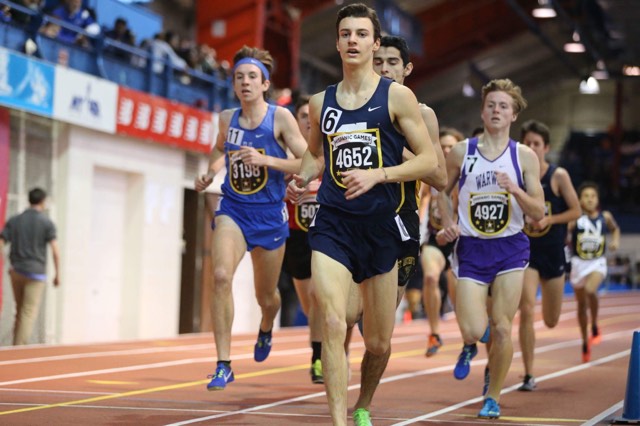 Will Landowne ’18 became the current fastest high schooler in the country to run the 3000 meter (1.8 miles) this season, with a time of 8 minutes and 34 seconds on Jan. 21 in New Haven.

As the captain of the boys track team, Landowne has been training all year leading up to his accomplishment. “We take off two to three weeks total in a year and I’ve been training for three and a half,” Landowne explained. “Since I took a few days off after cross country seven weeks ago, I’ve been running 40-50 miles a week.”

This constant year-round training allowed Landowne to feel prepared for the meet. “I was really just happy to run a strong race,” he said. “I know I’m in the best shape I’ve ever been in right now so just finally having a race that shows that makes me feel great.”

Despite the title of number one in the entire country, Landowne has remained humble. “U.S. number one is cool and all, I just know that the season is only getting started so I don’t want to get to caught up in that,” Landowne said.

Will’s co-captain, however, Christian Myers ’18, spoke highly of Landowne and the accomplishment. “I think we all knew that Will was in really good shape going into the race and that he was going to run fast,” Myers said. “Him winning and getting U.S. number one was definitely a surprise though. He was racing with some national caliber athletes and he performed super well; he ran a really smart race.”

Luke Lorenz ’19 is also proud of his captain. “It was incredible,” Lorenz said. “He’s above and beyond the hardest worker on the team and I couldn’t be happier for him.”

Lorenz, as well as the rest of the team, is excited to witness Landowne’s performance throughout the rest of the season, with their next meet scheduled for Jan. 27. “I know for a fact that his 3000 meter race isn’t his peak – it’s just the beginning,” Peter Clanton ’18, another of Landowne’s teammates, said.

Although Landowne’s race was a morale booster, the boys’ track team still has a long season ahead of them, with the Western Division FCIAC Championship ahead of them on Jan. 27.

“We definitely want to run well at FCIACS and state opens, either winning or at least placing well,” Myers said about their hopes for the season. “We also want to try to send a relay team to nationals and maybe take down the school record in the 4xMile relay.”

Photo contributed by Will Landowne ’18