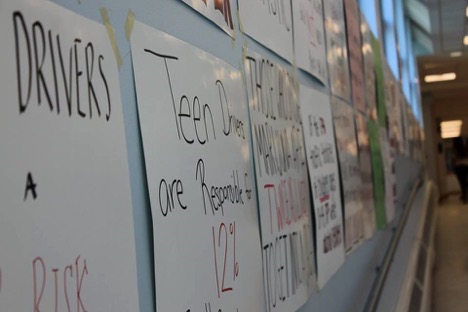 The Teen Awareness Group (TAG) will put on their 13th annual Grim Reaper Day on May 12 to inform students of the dangers of driving under the influence; though this year, it will look a bit different.

In the past, the most noticeable trademark of Grim Reaper Day was the dozens of students made up to look as though they themselves have been in a collision.

These Grim Reaper participants would be pulled out of their classes while their classmates were informed of the nature of their “deaths” by a police officer. However, this aspect along with the student obituaries on the walls will not be a part of the set up this year.

“I think it’s really important that we are both sensitive and considerate of the trauma that Staples has gone through this year, and the fact that we don’t want to trigger any previous feelings,” Gracyn Levenson ’16 said. “The day will still have its intended meaning, but there will definitely be less blood and gore.”

The student obituaries and  the tradition of pulling the students from class will be replaced with fun activities and stations. These stations will be about using positive methods to handle stress.

According to Jack Norman ’17, TAG treasurer, these lighter stations are meant to counteract some of the “morbidity” of the regular assembly that will remain similar to what it has been in years past.

“It’s not a day about sadness,” Norman ’17, said. “At the end of the day, it’s about not drinking and driving or getting in a car with a drunk driver.”

This message has hit cords with many students within Staples High School, including Taylor Rochlin ’18, who lost her brother in an accident involving a drunk driver in 2009.

“I believe that Grim Reaper Day is a really great day,” Rochlin said. “Last year’s Grim Reapers Day was about my family, and I think it touched a lot of people to know that it can happen to anyone in the community [and] it felt really good to tell my story and make people aware.”