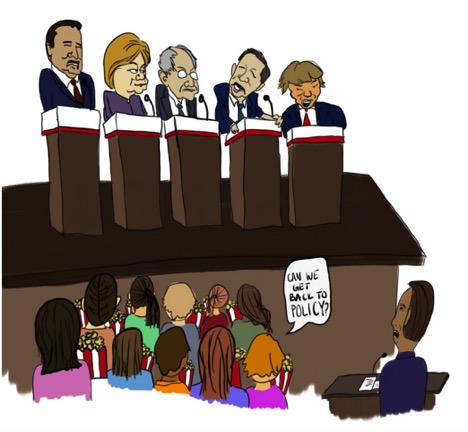 In 2015, an all new reality TV show premiered across America: the presidential primaries. This primetime hit may have provided us with an all-we-can-eat buffet of embarrassment, idiocy and bitterness, but it has also inspired record political participation.

Total Democratic voter turnout has rivaled numbers from 2008, and Republican primary turnout is at an all-time high.

However, this mass participation is not enough.

Modern political dialogue, hampered by a special kind of closed-mindedness that leads to exchanges of misinformation and political intolerance has become tantamount to religion—something people are both uncomfortable talking about and even more uncomfortable reconsidering.

Trump has been characterized as an egotistical racist. But when was the last time a debate dissected his viewpoints, such as his policies on price transparency in the healthcare industry, instead of attacking his personality?

Clinton has been labeled a detached liar. But when was the last time her past accomplishment in negotiating the Iran sanctions was considered before her candidacy was rapidly dismissed with a bout of name-calling?

This closed-minded stereotyping and prejudice applies to more than just the front-runners. Bernie Sanders’ supporters are chracterized as “young weed-smoking hippies.”

If we truly want an educated and tolerant electorate that desires more than fist-fighting and uninformed accusations, we must work to change the current political environment that is both ripe with prejudice and unconducive to true conversation.

As teenagers, we are America’s benefactors. We will inherit its problems, innovations and political culture. We may not be the sole cause of our broken political climate, but it certainly will become our problem to fix.

It may partially be our teacher’s responsibility to lead policy-oriented, election based discussions in class, whether that class be American Government or English. But as citizens ourselves, it is also our task to work to move away from our mob mentality voting behavior.

Our generation can take steps to create an environment in which policies, and not stereotypes, are the first thoughts that come to mind when a political candidate is mentioned. By doing so, we can create a world where people feel comfortable both sharing their political beliefs and keeping an open mind to opposing perspectives.

It is our responsibility as future voters to engage in a balanced political dialogue that promotes the type of educated voting we all, as Americans, desire.