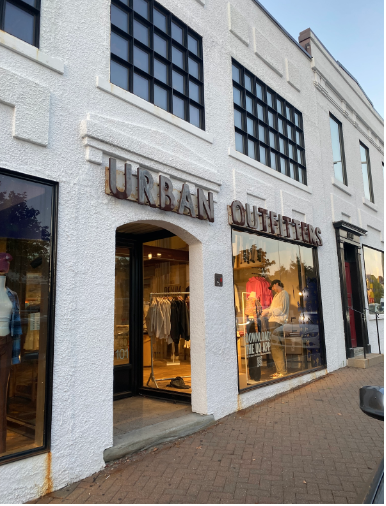 Urban Outfitters in Westport, CT. A trendy, but expensive, clothing store where many teens like to shop.

It’s a niche sound, the one Westport teens have come to know and love. It’s the unexplainable “ding!” of Apple Pay. It’s the sound of purchasing the newest color of the “Align” tank from Lululemon, or the trendy “Go For Gold” top from Urban Outfitters. When Westport teens go shopping downtown, the temptation to spend money is real. Friends are surrounding them, practically begging them to buy this clothing item because it’s “so cute” or “perfect.” While it’s nice to buy something every once in a while, constantly going to town and spending money that their parents probably gave them for lunch is becoming an issue.

According to an article by CNBC, including a study by Piper Jaffray, at the end of 2018, an estimated $75 billion dollars in spending was done by teenagers, with about one quarter of the U.S. population being under 20 years old.

Trust me, I know what it feels like to be caught under pressure and buy an unnecessary $40 t-shirt, but for it to become a weekly or even daily cycle is unhealthy and damaging. If cycles like this start to repeat more often, teens will develop a spending habit that is dangerous to both their parents bank account and their future as young adults.

When teens receive money, either from their parents or a job, they view the money as disposable income. Since they are still in their young teenage years and don’t have to face the real world just yet, the money becomes disposable and goes in through one swipe and out through the other.

On average, teens have about $104 of disposable income per week, according to Love to Know, and since paying a mortgage or rent isn’t on their priority list, they go shopping and spend their money immediately. Personally, I’ve tried to save money earned from babysitting or chores, but it’s difficult to pass up a spending opportunity when you spot the trendiest pair of jeans in the Brandy Melville window.

Especially with many stores in Westport showcasing young models to target their teen demographic, it’s basically irresistible for a teen to go out and not buy something, finishing off their week’s income in one trip. The situation becomes even worse when friends tag along, and they want to buy something to fit in or impress their friends.

As stated by Daily News, in a survey done, 45% of people said that they believe they spend more money while shopping with friends because their excitement levels are heightened. Not only does this apply to teens everywhere, but specifically in Westport. When you try something on in front of a friend, it’s difficult and sometimes embarrassing to not buy that item. You feel like your friend might judge you, or ask why you didn’t buy it. With all the stores that Westport has, teens might feel obligated to buy something in each store, spending all of their money.

Teens are feeding into the obsession of making shopping become a hobby, which means more money spent. According to Today, more than a third of teens believe that shopping makes them feel better than a workout would. Personally, I’m not judging these teens for their choices considering I enjoy shopping, but I do think that the unnecessary money spending is getting a little out of control. Purchasing new clothes every week can become an unhealthy cycle that wastes money and ultimately reduces savings that could be used for the future.

With that being said, I do think teens should still be allowed to shop and treat themselves, but a limit should be put on the amount that they spend while they shop. In Westport, with stores advertising cute clothes that teens would pay thousands for, not buying new items is hard. All in all, I think that Westport teens should manage their money better and create new spending habits, and maybe even think before buying the trendy $68 “Align” top.