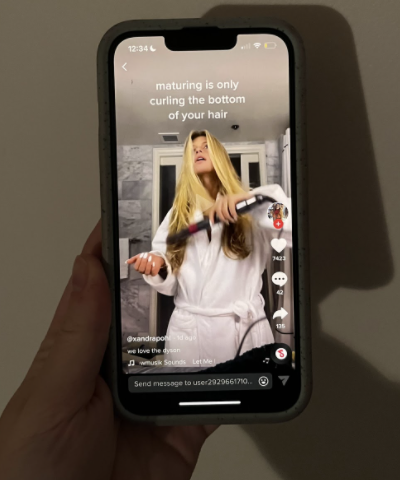 Videos like the one above are featured on TikTok and in Instagram reels. They portray a certain beauty standard to the young girls and boys across the world, resulting in negative body image issues to form.

I open my Tik Tok app to a bright eyed 17-year-old girl smearing a glossy pink tube across her lips and running a blow-dry brush through her wet curly head of hair explaining how to get the perfect beachy wave. I continue to mindlessly scroll, finding an 8-month workout evolution from a teenage girl meticulously explaining the steps to her astonishing weight loss journey. I click the broken heart icon to establish that I am, yet again, not interested, and hope that this video projecting a standard of beauty upon me will be replaced by a light hearted prank which might give me a laugh.

This toxic rendition of fixating on one’s outward appearance is shared with many teen youth, especially between young girls. According to Statistica 57.9% of Instagram’s users are female, while 42.1% of them are male. This means that girls will statistically be more susceptible to toxic media that is perpetuated throughout the app.

What is already a prevalent issue in our society, has now been amplified tenfold due to platforms like TikTok and Instagram. These apps give young, impressional girls the ability to open their phone and be fed constant media of altered and filtered photos making them hyper aware of their own appearance and the appearance of others.

At this exact moment, I have the ability to open my own phone to Instagram, scroll through posts and know that I will catch myself picking apart the photos that I see. In recent years, social media has heightened in its perpetuation of negative self-awareness in young girls, increasing the value that young girls place on their outward appearance over other, more important, features of themselves.

According to CNBC, 63% of Americans between the ages of 12 and 17 use TikTok on a weekly basis.  That means that the majority of American teenagers are subscribing to whatever information or news that comes up on their “For You” page.

Teens are watching other teens rise in likes and followers because they are attractive to watch or because highlights of their life are inspirational. These types of videos instill into them the perceived importance of beauty and impressing others through visible appeal.

According to MediaKix, four out of 10 Millennials say that their favorite YouTubers understand them better than family and friends. There is a broken connection between those who create social media and those who consume it.

Many consumers easily idolize their favorite creator because they might relate to them in a few aspects and they then go on to mimic the aspects that are visible to them such as appearance, rather than knowledge or skill.

Before I used Tik Tok, I was a self-described people pleaser. However, after using the app (especially during the months of quarantine), I realized that I was trying to please others in the way I dressed. It wasn’t until recently that I realized that I was conforming into a version of myself similar to the 17 year old girl that comes up on my “For You” page.

It is easy to fall into the trap of social media that appeals to impressionable young girls. According to Forbes, “depression, lower self-esteem, appearance anxiety and body dissatisfaction are all associated with Instagram use.” These platforms are geared to be addictive pastimes for youth, but in turn cause a multitude of mental health issues, as well as a hyper awareness of your physical appearance.

In order to avoid becoming sucked into this wormhole, it is important for teens to be aware of the tactics before consuming media, and also to be cognizant of how an influencer comes into their fame, and what they stand for beyond their aesthetic appeals.