A race to the Counties dance floor: the rush to ask supersedes the dance itself 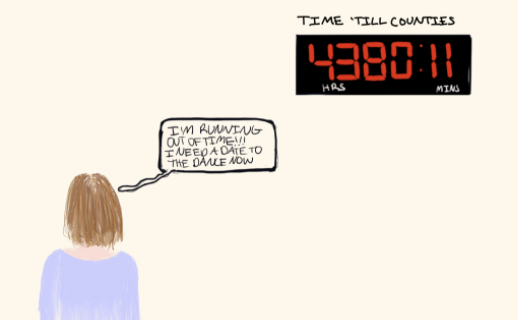 The County Assembly Charity Ball, also known as “Counties”, is being held in early 2022, yet many students have already started asking out dates now.

Most generations are familiar with the exciting, albeit somewhat nerve-wracking concept of  school dances. Decades ago, the typical procedure for asking a date to the dance might have been to pop the question a few weeks before and simply wait until the day finally came around. Easy. But people, we are no longer living in those glassy-eyed, black-and-white, simple days. Today, specifically in the Staples High School community, school dances are not for the faint of heart.

The County Assembly Charity Ball, commonly referred to as “Counties,” is the upcoming dance for all high school juniors in Westport, Weston and Wilton, set to take place around February 2022, after a year without it. Yet, while the dance is still less than six months away, preparations are already underway.

The first step, as with any school dance, is asking someone. But despite lacking proactiveness in other, more important areas in life, a large portion of high schoolers have already asked out dates before the first month of school has even come to a close. What’s the rush Gen Z? Where this early race to find dates originated is a question we’re all asking. It’s a sort of domino effect that occurs: as soon as one person asks, people get nervous and ask anyone they can think of before there’s no one left.

Because the race begins so far in advance, the anxiety is prolonged over several months. As if I need more stress in my junior year of high school.

I’m rarely a pessimist under normal circumstances. But I find that the amount of anxiety generated leading up to the dance, and subsequent dances, is such an unnecessary stressor, especially in the lives of hundreds of teenagers. Dances themselves are supposed to be exciting and are intended to give high schoolers an enjoyable break in the school year. Yet, this purpose gets lost in the amount of pressure circling “the asking process” before Counties; it poses a question of whether going is even worth it.

However, asking is only the first step. The second step is Asking. Popping the question the first time is child’s play. “Asking Someone to Counties in an Excessive, but Supposedly Fun Way 101” states that, following the act of securing a date, one must officially ask their date to the dance. This is also known as, “the promposal.”

Don’t get me wrong, I am largely looking forward to promposals. You surprise your date at soccer practice or chess club with a big sign that has some corny pun, maybe including your date’s name in it, and usually ending with “Counties?” in bold letters. However, it further proves the complexity and amplified importance of the school dance and everything leading up to it.

And what happened to letting nature take its course? People ask dates too far in advance to ever allow the beauty of finding someone you truly want to go to the dance with. It takes away from the wonderful connections made, the gradual attractiveness, the everyday surprises, and even the uncertainty of forming a romantic relationship, or even just an unlikely friendship with someone else.

So, my advice: slow down and ask someone when you’re ready. It’s not even Halloween for goodness sake.