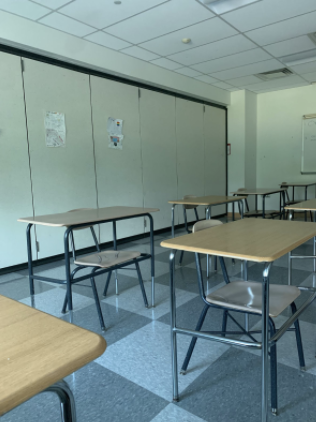 With the seniors gone, the back two rows of AP Economics class are left empty, as all students in the class have moved towards the front to better participate.

Every spring, the senior class is offered an amazing opportunity to go out of school early to participate in internships of their choosing before heading off to college in the fall. Sure this sounds like a great plan, if it weren’t for the shell of a school that will be left in the absence of the upper class.

As an upperclassmen myself, not only was there a sense of security that came with the students a grade above, but my classes were more involved with them in it. It’s no coincidence that while the lowerclassmen tend to be more scatterbrained with much less on their plate to deal with, the upperclassmen have a greater appreciation for their time left in high school. Stronger bonds with teachers, loud banter between students, authentic student collaboration– these are some of the many characteristics that the senior class brought to their classes. However the second the seniors skip out the Staples doors and pass  their parking spots on  to Juniors, the doors slam behind them and the rest of the student body is left utterly confused as to  how to proceed with the last month of school.

Don’t get me wrong, there are some upsides to senior internships like a great pre-professional opportunity to use on future applications, and the independence that is so strongly craved throughout high school. Some would even say it’s a time for juniors to step up to the plate. I, on the other hand, have been a victim of the stand still 80 minute periods that drag on without so much as a smart remark from a senior student.

Let’s be real. The seniors’ relaxed outlook on the rest of their high school career basically carried the class discussions and the classes’ relationships with their teachers. Once they were gone the teacher-student bond was a distant memory.

In addition, the overall atmosphere of the school has changed. For example where there were once hoots and hollers throughout the hallways on the way to class, now everyone rushes about with their heads down in a half stressed half awkward strut. It seems as if we are all sleepwalking, aware of one another’s presence but with an equal lack of care.

I’m sure next year everything will return to the way it once was when four grade levels existed harmoniously, but for now it’s a mad rush to the finish line and it’s every (wo)man for him/herself.