Legalization of cannabis is necessary, overdue 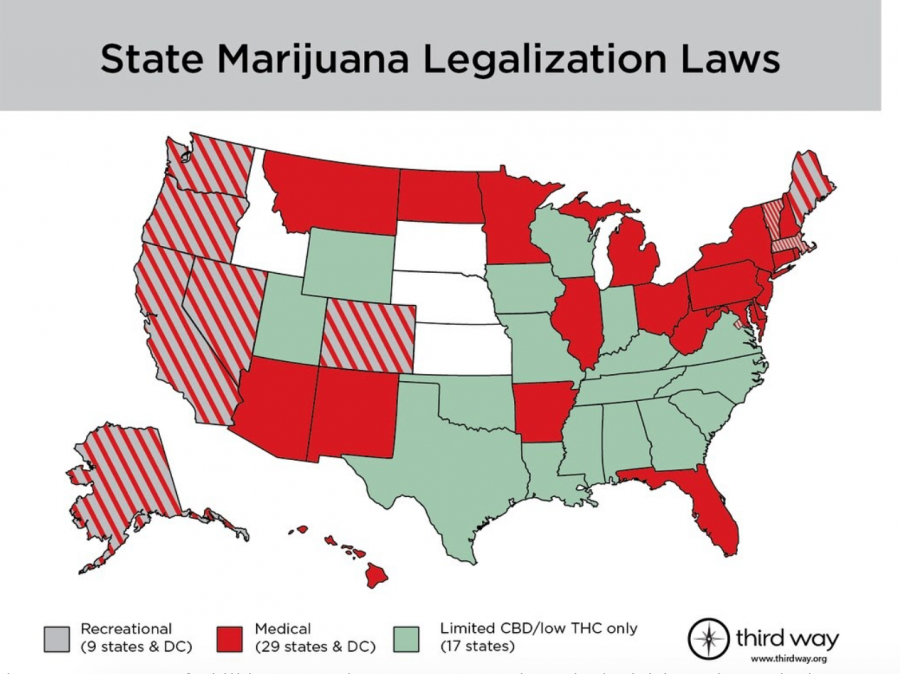 In Connecticut, the sale of cannabis can result in a prison sentence of 20 years, an absurd amount of time to be lost in one’s life. Cannabis legalization has long been a topic of interest in the United States, owing to its increasing use and the overwhelming public support for its legalization.

On June 8, the State Senate narrowly voted to legalize recreational cannabis use. This represented yet another development in the long-enduring debate about cannabis legalization, and is but one step closer to that reality. However, with the house GOP threatening to filibuster the bill, cannabis legalization remains in jeopardy. It is, therefore, vital that the importance and benefits of legalized cannabis be recognized, including the inefficacy and expense of current prohibition policies, the economic benefits of legalization, and the racial inequity that prohibition perpetuates.

One of the most obvious questions, and yet one of the most frequently overlooked, is that of whether or not cannabis bans are effective. Supposing the goal is prevention of cannabis use, historically, prohibition has not done much to this end. As law enforcement has made cannabis arrests more of a priority, usage has only increased. Ironically, it reached an all-time low in 1990 when arrests for possession were at their lowest and other priorities in drug policing took precedent. In Alabama, for example, a state with some of the most severe cannabis possession laws, cannabis use increased over 20%, according to the Executive Office, in the years from 1992 to 2010. This, despite dedicated laws and enforcement thereof, is manifest evidence of the inefficacy of cannabis prohibition.

In 2010, to enforce laws such as those in Alabama, states spent a combined 3.6 billion dollars, as per the ACLU. This, clearly, is a significant number, and represents a large portion of taxpayer capital to be dedicated towards the enforcement of ill-conceived policies that aren’t working. In contrast, in states where recreational cannabis use is legal, the economic benefits for the state and for individuals have been significant. According to the Colorado Department of Revenue, Colorado collected almost 400 million in tax dollars from cannabis, and in total, sales in the state were more than 2 billion dollars in 2020. Furthermore, a legalized industry for cannabis provides both employment and investment opportunities. The dissimilitude is striking: cannabis prohibition is both ineffective and wildly expensive, whereas its legalization is profitable and creates more resources that can be dedicated to other issues.

More than its economic benefits, cannabis legalization is promising in the continuing struggle for racial equity in the United States. Though cannabis’s status as contraband is generally seen as a given in the United States, cannabis was legal until the 1930s, and its prohibition has always been tied to racial prejudice and fear-mongering rather than concrete medical evidence. The common use of its Spanish name, marijuana, was employed as a way to connect it to Mexican immigrants–– who began arriving in larger numbers in the early 1900s––and link them to scientifically unsupported claims of cannabis engendering violence. During the War on Drugs, another racially discriminatory era and set of policies, it’s no surprise that cannabis, too, was used to disproportionately punish communities of color. This, unfortunately, has persisted into today, something obvious even in Fairfield County. According to the ACLU, black people in Fairfield County are more than 4 times more likely to be arrested for cannabis possession than white people. To varying degrees, this disparity, without exception, is echoed in every American state. The enforcement of cannabis prohibition is inconspicuous in its racial biases, and that basis alone should prompt a thorough reconsideration of its ethical merits.

More than anything else, cannabis legalization is a human issue that demands we pay attention to all of its nuances. The prohibition of cannabis use is an ineffective, expensive, and racially discriminatory policy that now, in Connecticut, has the chance to be reversed. With any luck, it will be. Beyond that, now is an opportunity to personally advocate for recreational cannabis legalization by contacting one’s representatives in the state House of Representatives, spreading awareness amongst peers, and taking it upon oneself to learn more about the implications of cannabis legalization. Now is a time of unique opportunity and potential, and we would all be remiss not to take advantage of it.