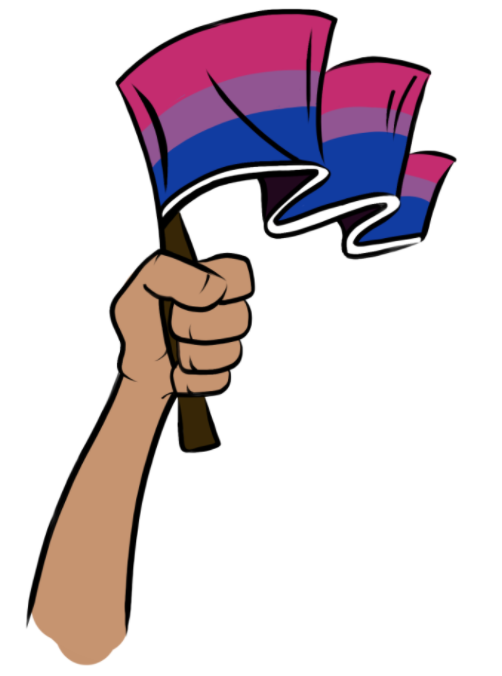 Bisexuality is defined as the sexual and/or romantic attraction to two ore more genders, normally both men and women.

Homophobia, a blanket term for hate-based discrimination against the LGBTQ+ community, is a term many are familiar with today. However, a smaller, more focused term has emerged: Biphobia. By definition, biphobia is an aversion toward bisexuality and bisexual individuals. Biphobia normally takes the form of denial that bisexuality is a genuine sexual orientation. This definition not only catagorizes hate from homophobic people but also opens the ability for even members of the LGBTQ+ community who identify as queer to display levels of biphobia.

Coming in a variety of forms, biphobia targets and heavily damages those who are on their journey to understand their sexual and romantic preferences. In my personal experience, the most damaging forms of biphobia are usually subtle, seemingly innocent comments that have held me back from embracing my identity and have exacerbated my internalized biphobia. On top of the individual impact, biphobia distances and alienates large groups of people from the LGBTQ+ community as they are told that bisexuality does not exist or doesn’t classify as queer.

Biphobia causes many bisexual individuals to experience stigma, prejudice and discrimination due to their sexual orientation that other queer groups may not face. Comments such as labeling a bisexual person ‘straight’ or ‘gay’ depending on who they are in a relationship with or calling their bisexuality a ‘phase’ into ending up as ‘straight’ or ‘gay’ are extremely common. Another ‘joke’ I hear a lot is that I have a ‘straight pass’ since I experience interest in boys as well as girls. This two-word phrase is responsible for copious amounts of my own struggle. My sexuality does not disappear when I am in a relationship with a boy or a girl. I am bisexual regardless of who I am with at any given time. This idea is echoed across the bisexual community as it a widley reoccuring issue.

Other common and frankly toxic comments arise from those who discredit the experience of bisexual-identifying people. Some call biphobia a ‘watered down version of homophobia’ — this is not true. Ontop of facing the usual homophobic slander and attacks when bisexuals are in a same-sex relationship, bisexuals also face their own brand of hate, usually from within the LGBTQ+ community.

On TikTok, some LGBTQ+ members have called coming out as bisexual as nothing more than a recent trend since more people have begun to publicially identify with the label ‘bisexual’. Others may offensively call bisexuals disloyal as bisexual-identifying people are ‘more likely to cheat’. Any level of these comments are detrimental.

While these instances seem like inconsequential jokes to some, these phrases hold extreme power over one’s confidence in their sexuality. Becoming confident enough in oneself to label their sexuality is a scary and sometimes dangerous thing to do. By discrediting their experience is to tell bisexuals that the feelings they have are simply wrong.

Such comments, jokes and generalizations of the bisexual and pansexual communities must be abandoned immediately.

With the current issue of biphobia, many are feeling detached from and unwelcomed from the LGBTQ+ community. The LGBTQ+ community is, in most cases, a warm, welcoming and safe environment. To continue this positive identity, the LGBTQ+ and its allies must work to be more understanding of the language they use when describing or joking about those who identify as bisexual.

While we may not all be the same, all queer people understand, at a basic level, the feeling of being ignored, cast away or treated as ‘different’ because of our sexualities. This is the time to come together and celebrate each other, rather than push away those who are just as important to our community.