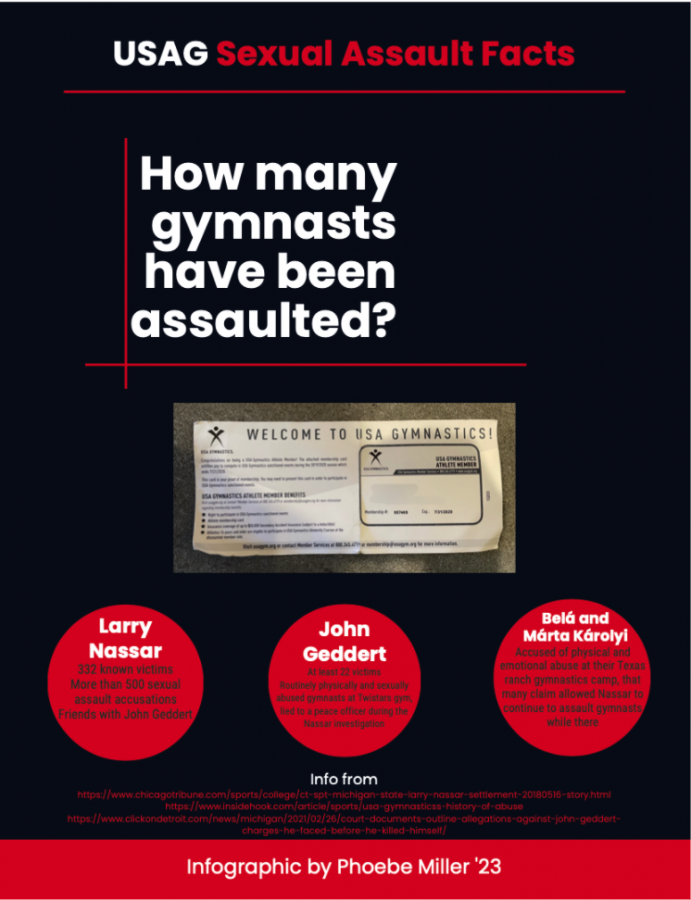 The USAG allows hundreds of young girls to be abused at the hands of their coaches. The USAG must address these abuses and let authorities deal with these cases.

In fourth grade, I did a project on the wonders of gymnastics. I bought a book that talked about every aspect of gymnastics, but soon I reached a chapter that startled me. It talked of the violence in gymnastics, and something that I hadn’t even known existed: the sexual abuse.

The worst part was, my own gymnastics program for which  I competed, the United States Gymnastics Association, harboured some of the worst abusers of all. It revealed to me that the USAG’s handling of sexual abuse allegations was and still is mediocre at best, and they must do better in handling the well-being of the gymnasts they are supposed to be nurturing.

After Olga Korbut and Nadia Comăneci, two very young girls from Eastern Europe, displayed their flips in different Olympic games, the popularity in gymnastics among little girls rose. The most elite of them would be sent to different camps, many influenced by the USAG, such as the Károlyi Ranch, which turned out to be one of the places that tolerated sexual abuse by famous doctors and coaches such as Larry Nassar. Infamous coaches such as Belá and Márta Károlyi knew about these molestations, but instead chose not to report these happenings for fear of destroying the face of the USAG.

For decades, sexual assault accusations by women, young or old, have not been taken seriously enough by associations like the USAG, who have done nothing about these abuses, instead sacrificing the mental and physical health of their gymnasts to preserve their own honor. Even when lies about what has happened came out, the program has done nothing to redress these.

NBC reported that, “Nassar was fired, but put out a statement saying he was retiring that went uncorrected by USA Gymnastics.”

Even when sexual assault allegations have stared the USAG right in the face, and even when Nassar lied about the reason he was fired, the program continued to lead its victims on and not let the truth about Nassar be known. The documentary “Athlete A” revealed the horrific torture that famed gymnasts such as former NCAA gymnast Maggie Nichols reported, but ultimately, were ignored by the USAG institution.

Its former president, Steve Penny, resigned after claims about the USAG came to light. Penny was later arrested in 2018 due to tampering charges in Nassar’s sexual molestation scandal, bringing the world-famous establishment that the USAG had created to rightful disgrace.

Now, it feels like new offenders are uncovered in the USAG every day. Most recently charged was John Geddert, the coach of the 2012 women’s Olympic gymnastics team, charged with 24 different felonies, including human trafficking and sexual assault. On Feb. 25, 2021, Geddert committed suicide, mere hours after being charged with the crimes. The gymnasts abused by Geddert will never have closure, and will never be able to see justice served. The USAG’s toxic environment has bred too many abusive employees who have only received a slap on the wrist for the life-long trauma they have inflicted upon hundreds of gymnasts.

The USAG sexual abuse events are a staple in knowing what we should do to avoid this ignorance of wellness in the sports industry. As a gymnast, I want to feel safe doing the sport I love, and knowing that the USAG will allow the people who are supposed to protect us to abuse us with no punishment is disheartening. The USAG has and continues to inflict scars upon gymnasts that will never heal, unless the industry takes real accountability for the monsters in their company that have been allowed to take hold of their gymnasts.