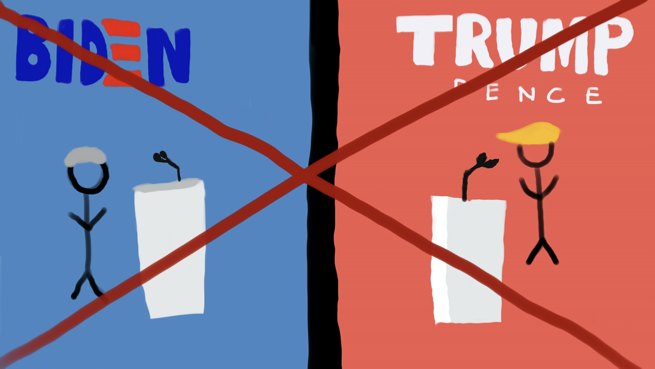 The Oct. 15 Presidential Debate was cancelled, due to President Trump’s refusal to participate in a virtual alternative.

I never thought I could possibly write these four words: thank you, Donald Trump.

As we all know, President Donald J. Trump and Vice President Joseph R. Biden Jr. were scheduled for their second televised debate on Oct. 15. However, since Trump was diagnosed with COVID-19 on Oct. 2, the Biden campaign requested that the debate be conducted via Zoom. Because the state of Trump’s health has been kept under wraps by his staff, it is impossible to assess how contagious he may be. It is absolutely vital to keep the two candidates and their teams apart, during a period where Trump may still be contagious.

Not surprisingly, Trump rejected a plan for the virtual debate. He has taken every opportunity to minimize the real risks of COVID, on individuals and on our country. He also looks for every opportunity to belittle and mock those who treat this virus as a serious threat.

Under normal circumstances during an ordinary election season, the loss of a televised debate would be a blow to our democracy. Historically, debates have been a critical opportunity for voters to learn about each candidate. Undecided voters could listen as candidates thoughtfully answered questions and respectfully traded opinions.

In previous elections, candidates’ performances at debates have been important factors in voters’ decisions, the most famous example being the 1960 presidential debates between Senator John F. Kennedy and Vice President Richard Nixon. Like today, the 1960 presidential debate was a tight one. Most people predicted that Nixon would win. But Kennedy’s charismatic and riveting performance eventually outshone Nixon’s.

Trump repeatedly bullied, interrupted and lied. In one of the most ironic moments of the debate (given Trump’s subsequent COVID diagnosis), he mocked Biden for wearing a mask, saying how he does not wear a mask like Biden does, and that Biden always has a mask on wherever he goes.

Given Trump’s truly outrageous behavior at the debate, it’s tempting to laugh or scoff off his performance. However, his utter lack of respect for our country’s democratic processes and institutions are a great reminder of what’s at stake this election.