Downtown Westport is changing – and not for the better 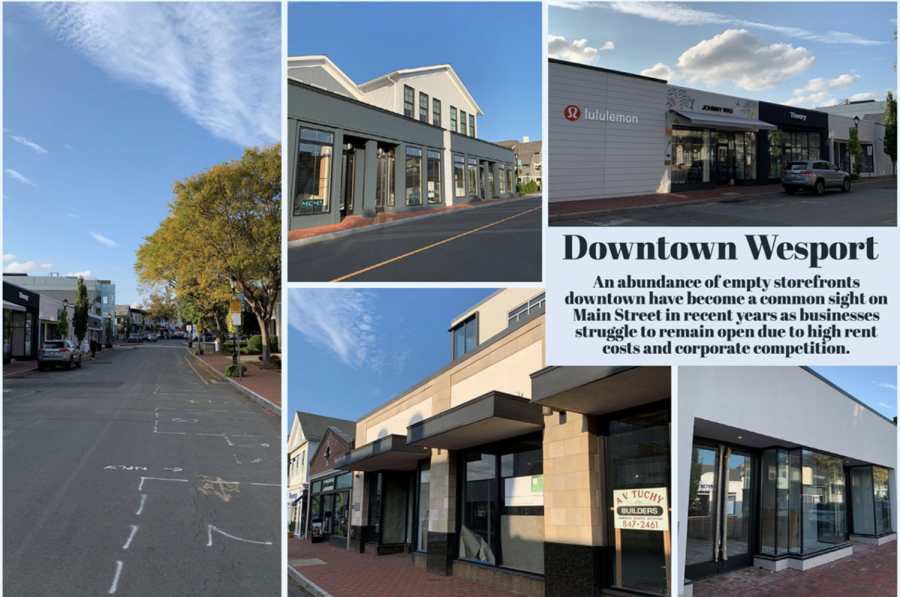 Graphic of photos of storefronts on Main Street in downtown Westport.

Downtown Westport, particularly Main Street, has become synonymous with great shopping and restaurants amongst residents of Fairfield County over past decades, but today’s downtown is far from it.

A short walk down Main Street depicts a once prosperous array of storefronts, now nearly deserted and littered with “For Lease” signs. The sad reality is that downtown Westport is transforming into an unrecognizable ghost town.

I believe that the unfortunate decay of our beloved downtown can be attributed to three main reasons. They consist of increased rent prices, competition from large corporations and new retail developments. Since my move to Westport in 2008, I have seen these three factors lead to a transformation of downtown unlike any other.

The prime location of downtown makes real estate incredibly desirable and although landlords try to maximize their profits, they should do so in a way that does not drive away small businesses that cannot afford the high monthly costs.

An article in Dan Woog’s blog, 06880, included the findings of New York-based TV producer, Evan Chevrier during his analysis of downtown Westport. He found that the ever-increasing rent is a driving factor for the closures of storefronts.

This information is a double-edged sword in the sense that I believe it is only fair for landlords to struggle to rent out their properties because of their blatant gouging of tenants with high monthly rents, but a consequence of their actions is the further demise of downtown.

Even the New York Times wrote an article about the high rents of downtown Westport and found that landlords are charging tenants upwards of $45 per square foot.

A look at Main Street illustrates the effects of this, as the many mom and pop shops that once had storefronts on Main Street have been replaced by large companies such as Lululemon, Urban Outfitters and Pottery Barn, just to name a few.

It is a sad reality that the closures of mom and pop shops and the openings of chain stores destroys the character of downtown Westport that made it so unique. As a town that had prided itself on its downtown area and wide selection of stores, the increase in chain stores makes me believe that its appeal is dwindling to frequenters of downtown.

As the traditional way of commerce has been uprooted by the rise of online shopping due to corporations like Amazon, stores have been greatly affected, even those in our own backyard.

As stated in an article published by Westport Now, Savvy + Grace owner, Annette Norton shared her concerns with the rise of online commerce with local officials and the harm it is doing to her small business and others like it.

The struggles of the few businesses to remain open downtown leaves an abundance of available retail space, yet new developments continue to be completed.

In particular, Moran Construction Management LLC recently completed a project on Elm Street downtown that offers 6,700 of retail square feet, according to the website of the brokerage representing the development, David Adam Realty.

The development has sat empty since its completion in June, 2020 and judging from the surplus of available retail space downtown, I do not see the space being occupied by any businesses in the near future.

There is no one clear answer as to how to solve the problems facing downtown Westport or if they can even be solved, but I believe that we as a town can reverse these changes.

It starts by simply taking action.

The Westport – Weston Chamber of Commerce can help combat these negative effects by creating regulations that prevent the increase of rent prices for businesses and denying new proposals for new retail developments until existing space is filled.

I am optimistic that instituting such changes may help to improve the downtown area that we as Westporters have come to love and hopefully can be restored to its former glory.