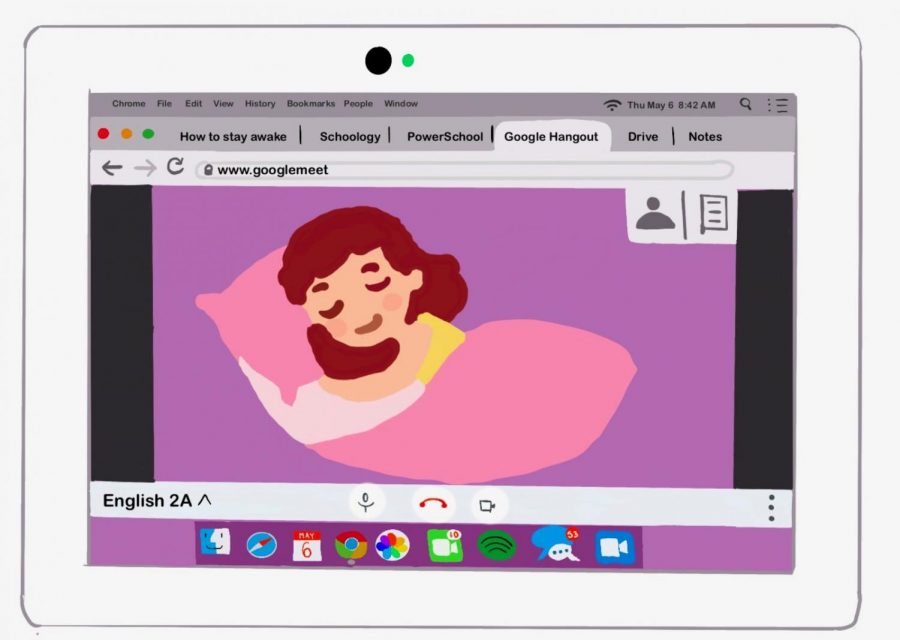 Students continuously sleep in their beds during class calls.

I have always struggled with the aspect of waking up early for school. I tend to be late for class, however, with the new schedule rotation, I am able to manage waking up in time to get ready for online class.

Numerous students are treating these school days as a joke and are not attending classes appropriately. Students enter their google-meets while sitting in bed, or even lying down looking like they have only woken up two minutes prior to class. The administration needs to take action against this, as it can be distracting and disturbing to fellow classmates and teachers.

The administration is already being extremely lenient with our schedule by allowing school to start an hour later and getting out at 12:15 p.m. rather than 2:15 p.m. This causes the school day to be about four hours instead of seven hours.

Staples is trying their hardest to make this transition as easy as possible for students and teachers. By providing student-teacher interaction through mandatory online conferences, students have access to their teachers as if we were at school in a class setting.

It doesn’t take great effort to sit at a nearby desk or even just simply wake up 10 minutes earlier to look presentable for class. If we were attending school as normal, I doubt anyone would roll out of bed and go straight to the bus and or car. Instead, one would take the time to change out of their pajamas and brush their hair.

According to studies done at Lafayette College , it is important to maintain a normal routine during quarantine. Most students are not following this recommendation and are taking advantage of online school. If students were to follow a routine, they would get ready for the day by getting dressed and eating breakfast prior to their 8:30 a.m. class. For some, this routine is not ideal, but it is crucial in order to maintain focus on school.

Teachers attempt to be understanding but in the end become frustrated with the attitude of students during google-meets and have complained. Teachers have written emails to both students and their families attempting to address the issue. Some teachers have even asked students to stay on the call for a few extra minutes to inform them of their inappropriate etiquette in class.

It is important to be both mentally and physically present in the google hangouts. Being attentive during class shows a form of respect to your teachers as this transition is just as hard for them as it is for the students.