Nationalism rises in recent history, proves to not be beneficial 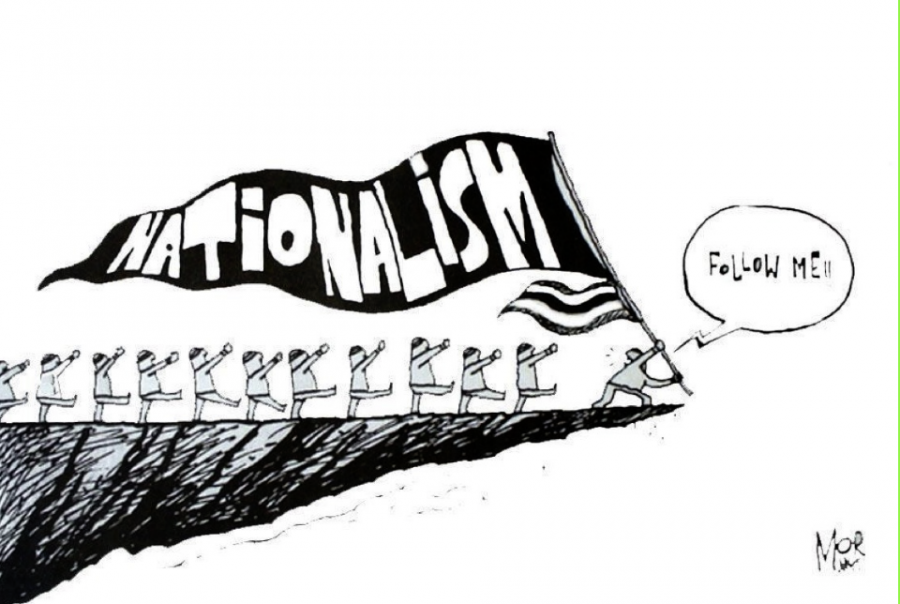 Photo contributed by The Economy Journal

With the evergrowing rise of nationalism, it is possible that we may be drawn over the edge of the cliff.

Nationalism is defined as loyalty and devotion to a nation by the Merriam-Webster dictionary. On the surface, one could argue that this definition would highlight nationalism as a positive aspect, but can there be a negative side to nationalism?

Since the advent of modern society, we have seen pockets of populations take this devotion too far. Over the last century, we have seen nationalistic rhetoric and actions take aim at certain religious and racial groups.

Nationalism showcased its horrific extremities most clearly during the systematic eradication of the Jewish population in Nazi Germany. Today across Europe, Asia, and the Americas, many government leaders are beginning to speak with rhetoric that sounds eerily similar to that of the Reich during the Nazi occupation.

We are facing many modern atrocities such as genocide in Africa, hate crimes against Muslims across the globe, massacres in Syria, displacement of the Palestinians and the closing of borders on fleeing refugees. This history we are living through forces us to ask the question: to what extent will this new nationalism re-manifest itself?

By definition, it can be argued that nationalism is positive. What could possibly be wrong with being loyal and devoted to your nation? I argue that our current events as well as the world’s history for taking nationalism too far is a perfect example of why too much of a good thing can quickly turn bad.

Let’s unpack the Holocaust as a starting place for nationalism going wrong. Over six million Jewish citizens were executed in gas chambers as they were seen by the Aryan brotherhood as an inferior race.

Adolf Hitler was able to take Germany’s nationalistic pride as a call to action to flip on people of their own country. The Germans, coerced by the nationalistic rhetoric, ended up joining the Nazis as a way to support them. Nazism ended up brainwashing Germans to believe that Germany’s homeland was the single most important thing in their life and nothing should come before their love for it. The Nazi party even called themselves nationalists and flipped the meaning of devotion on its head.

According to the Library of Social Science, Nazism insisted that the German people be devout to their country and its leader Adolf Hitler. Hitler explained this further by saying that being true to their country was almost a “profession of faith”. If someone did not support this faith, then they would be considered the enemy.

This exemplifies the proverbial slippery slope of nationalism.  It was far too simple for one leader to flip an entire nation on its head and use the excuse of nationalism as a reason to take up genocide.

If you compare nationalism from sixty years ago to today, there are certainly many similarities we can examine. First we examine the recent waves of nationalistic rhetoric from leaders such as President Donald Trump, Vladamir Putin and Boris Johnson. Events like Brexit and ideas such as closing off borders and limiting free trade with nationalistic agendas plague our Twitter feeds. The Brexit vote was mainly driven by European nationalism which also targets migrants from the Middle East and Africa.

The United States is no stranger to nationalism. In fact, our founding fathers developed a constitution to protect our unalienable rights rooted in strong nationalistic views.  Events such as Charlottesville, El Paso, Jersey City demonstrate that we may be wading into deeper water.

Some may argue that the  “making America Great Again” and “America First” mentality is good nationalism. But the aforementioned events seem closely linked with the nationalistic view of our current administration. I see parallels that are starting to bother me, a new era of nationalism is arising with white supremacists groups resurfacing. There have been claims that this jump has been inspired by our current Commander in Chief.

According to The New York Times, the numbers of white nationalist groups jumped by almost 50 percent, to 148 in 2018 from 100 in 2016. Previously, the number of hate groups had fallen for three consecutive years. Since 2018, a new wave of white supremacists who like to call themselves nationalists have surfaced. There has been a direct correlation with the new administration and the growing rise of hate groups in the United States.

President Trump calls himself a nationalist.  Therefore, it is no surprise that these hate groups have been reinvigorated. It is also no surprise when the reasoning behind this is justified “in the name of the United States.”

President Trump has given these groups new life. He had an opportunity early in his candidacy to take on white nationalist in the aftermath of Charlottesville, but he instead chose to say that both sides had fault.

This in turn provided protection and support, whether the President intended to do so or not, to many hate group factions across our country. With the flames of hatred being fanned, we need to draw the line on the idea of overstepping good nationalism.

All this said, I truly believe that nationalism is not about national identity but merely a nation’s sovereignty. Throughout the years, the definition of nationalism has been as manipulated and abused as those who have suffered from its injustices. As we continue to write our history, time will tell whether we can overcome the negative implications of nationalism and focus on the positive ones.