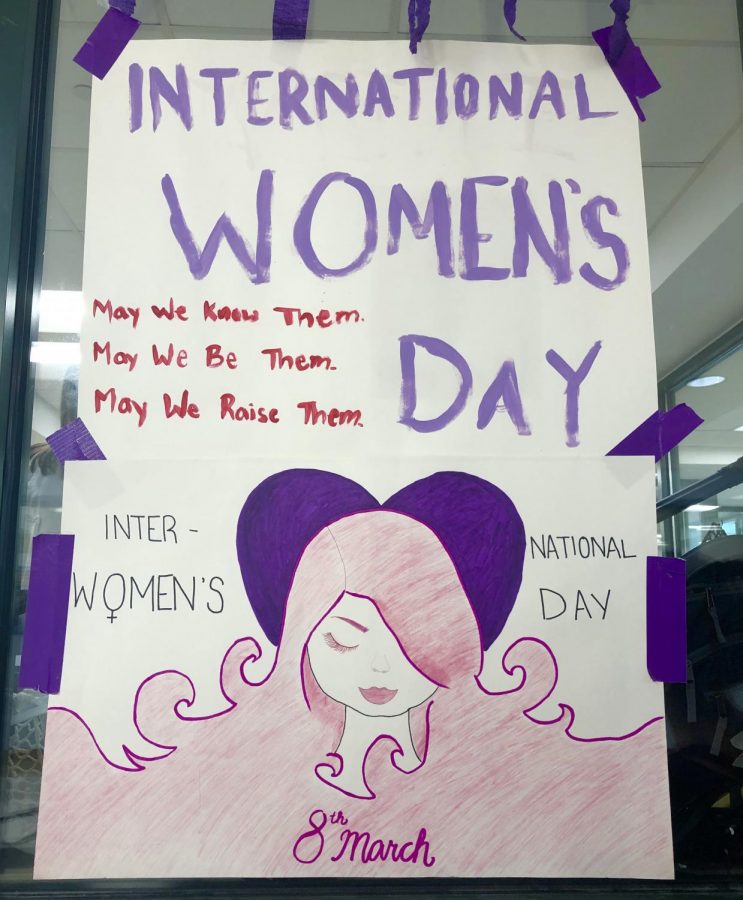 Students in Women in History encouraged their peers to partake in activities for International Women's Day, including wearing purple to school and answering various true or false questions.

If you look at a calendar, you’ll find that there’s a designated day for everything: National Ice Cream Day, Puzzle Day, even a day entirely dedicated to chocolate cake. But the hallways festooned in purple and decorated with balloons and streamers celebrate a day of little frivolity: International Women’s Day. International Women’s Day reminds us that women should celebrate the steps they’ve taken to reach equality.

International Women’s Day took place on Friday, March 8 and while it was a time of pride for many women, it also incited  uproar on social media. Many claimed that the celebration of female rights was “sexist” and “unfair,” largely citing the false assertion that women get a day to celebrate their gender while men do not. This is blatantly untrue. While it receives comparatively less acknowledgement, International Men’s Day is on Nov. 19. Most were only upset about International Women’s Day because they felt left out and didn’t want to acknowledge the hardships women went through that caused them to need this day in the first place. Critics insisted that there was no reason for the day because women are completely equal to men. However, by claiming this they are failing to recognize the obstacles women faced in the past and in present day.

International Women’s Day has only enjoyed positive impacts. It has empowered young girls by encouraging them to pursue whatever career they choose and participate in activities or wear clothes that women have been criticized for in the past. It teaches girls to put aside the stereotypical idea of femininity and be whoever they want to be. It also acknowledges amazing and powerful women from different generations that have contributed to women’s equality and made a difference.

It took years of protest for women to gain the rights that we take for granted everyday. Celebrating the journey toward gender equality reminds us that we still have a long way to go. After all, it was only 1920 that women gained the right to vote. Though we’ve made tremendous strides since then, women still aren’t completely equal to men. Women aren’t paid as much as men don’t get hired for certain jobs simply because of their gender. There are many stereotypes that come with being a women that stop them from having the same opportunities as men, such as the idea that they are more sensitive and can’t take criticism.

International Women’s Day is an important and necessary day that allows women to take a look back at the women that came before them, and become mindful about their ability to create positive change. It should not only be acknowledged, but respected.