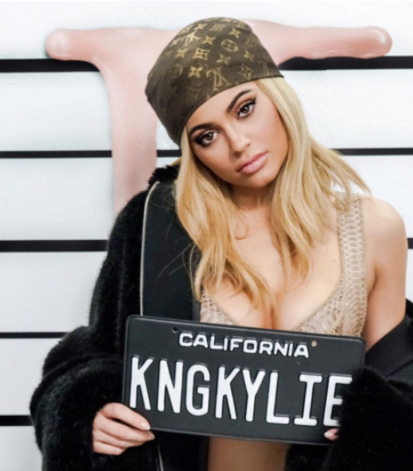 Scrolling through my Facebook feed, I come across an ad for Kylie Comstemics, Kylie Jenner’s Lip Kit Company. This company’s products have managed to not only break the internet (twice) with her products being sold out in less than a minute, but she had managed to make her filler-filled lips covered in brown dried lipstick (also know as the Matte collection) desired by girls across the nation.

As I click on the ad as a form of pure procrastination, I see a suggested video titled “Glosses.” Curious as to what kind of video this could be, I travel to the page where I will proceed to watch what could have been the most confusing “music video” of the century.

Glosses by Kylie Jenner advertises her upcoming lip gloss line. It starts off with her driving up to an old motel in the middle of the desert, where she seems to be just hanging out, listening to a very catchy song by the a new group call Terror Jr. Wearing a Louis Vuitton scarf wrapped around her head, and lounging in a brand new Rolls Royce, she could not look more out of place.

She then proceeds to get in touch with her also incredibly-well-dressed-for-the-occasion friends who are inside the motel. They are participating at what’s seems to be some sketchy deal with briefcases of money involved.

After a text with the single word “GAMETIME” is sent, chaos ensues. Heads are shoved in fishtanks, guns are whipped around by models, and a not so stealthy getaway concludes the video, except for a cute squad mugshot at the end.

Rebecca Barr ’17 expresses that while she found the video entertaining “…it doesn’t make me want to buy the lipgloss any more or less…this was just so strange it was funny.”

Now, some things that I am still questioning after watching this video:

1: What was the purpose? Did she lose a bet? Also, is this a joke? Kylie’s Lip Kits sold out in minutes, so this is definitely not a need for advertising.

2: This looks exactly like a Rihanna music video, without the talented wonderful artist in the front. So what is exactly is the point?

3: Why did they throw all the money in their air as they were leaving the motel that they just fought multiple men for?

4: Why is the lipgloss only seen in the video twice if that is what it is supposedly advertising?!

Now we the people just wonder what is next for Kylie. Is she following her sister Kim K and trying out the music industry (Yes, Kim Kardashian had a song)? Is she spearheading music video advertising?

I will have to keep up with Kylie to see what she has in store for us next.