Why I stand with Planned Parenthood 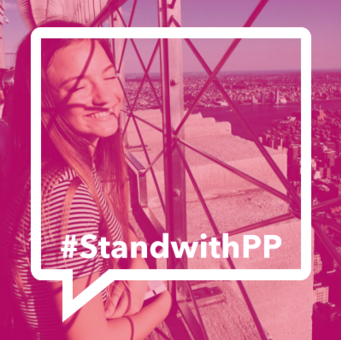 Planned Parenthood is the largest health care provider for women in the United States.  In 2013, it performed almost 865,721 pap smears and breast exams, provided 3,577,348 birth control services and information, and 4,470,597 tests and treatments for sexually transmitted infections. These efforts helped bring the teen pregnancy rate to the lowest it has been in 20 years.  Despite all the work Planned Parenthood does for women, Republicans are still doing whatever they can to defund the non-profit organization, and prevent the 2.7 million women it saw in 2013 from continuing to receive its services.

These attacks from Republicans are not a surprise from a political party whose latest debate featured 12 men and only one woman on stage, none of whom support a woman’s right to choose.  Most recently, Planned Parenthood has been under attack and criticism after the release of heavily edited videos which depict Planned Parenthood officials discussing how they will acquire fetal tissue samples to perform medical research, which is 100 percent legal, but these videos have depicted it as a crime. In fact, only six out of the 700 Planned Parenthood facilities in the United States use fetal tissue for medical research, and receive full consent from the women who are having the abortions.

That these videos are heavily edited has not stopped Republicans from exploiting them and using them to serve their agenda. In the second Republican debate, Carly Fiorina discussed a Planned Parenthood video in which “a fully formed fetus [is] on the table, its heart beating, its legs kicking, while someone says, ‘we have to keep it alive to harvest its brain.’” This video does not exist. After the full video was released, the image that Fiorina discussed was nowhere to be found.

We cannot move backwards in the fight for gender equality. We must move forward, and access to affordable reproductive services is only the first step. In 1916, when Margaret Sanger, Ethyl Byrne, and Fania Mindell opened the first birth control clinic in the United States in New York City, they were arrested and jailed for distributing ‘obscene materials’ at the clinic. In 1964, Gerri Santoro of Connecticut died trying to obtain an illegal abortion, before abortion was legalized in the 1973 court case Roe V. Wade. Today, 47,000 women die every year from complications from unsafe abortions.

Congress’s plan to defund Planned Parenthood is more than a methodical attack on women’s health; it is an attempt to bring the United States back to 1916, when women’s health services were viewed as obscene, and a woman’s right to choose was in the hands of politicians.