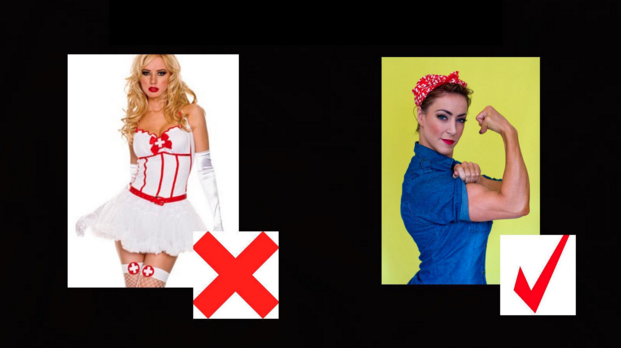 I was obsessed with Halloween when I was a little girl. I mean, who wasn’t? I loved going to find the perfect pumpkin to carve however I pleased and stuffing my pillowcase to the brim with candy. But the best part about Halloween was the arrival of the endless costume magazines which poured out of my mailbox, and then circling just about every princess costume I could find.

The thing is, once I turned 12, I needed to start looking at the teen section for Halloween costumes, and the results were horrifying. As a preteen girl, I was already pretty uncomfortable with my body, so once I discovered the teen section of my favorite Halloween catalog, the image of myself in any of the extremely revealing costumes mortified me.

“I think it’s kind of disgusting that the only option women and girls have is to be overly sexualized, even if that isn’t the way they want to look,” Nicole Kiker ’17 said.

If the point of Halloween is to be scary, I guess that’s what costume stores have accomplished with women’s costumes.