Why I Couldn’t Handle AP Assassination 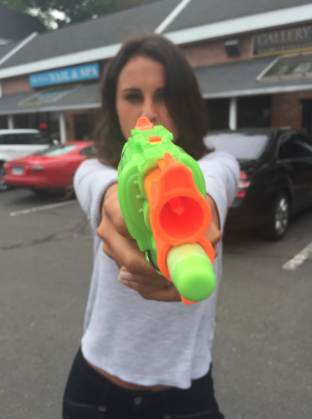 Step One: Take an AP class during your senior year.

Step Three: Find out who your target is and strategize.

Step Four: Stay in your house to avoid getting shot.

Step Five: Avoid restaurants, public places, and your friends to avoid being set-up and

I think I am the only person in AP Assassination history who saw her target running toward her on one of the last days of the first round and said, “Just shoot me.”

Don’t get me wrong, I love AP Assassination. In fact, I was excited about it and preparing for this Hunger Games-like tradition for weeks before targets were even assigned. Whether it was buying the perfect Nerf Gun or doing target practice with my dad, I was ready to play.

AP Assassination always seemed like just about as much fun as any senior can dream of having. It is reckless, chaotic, and absolutely insane, as students are encouraged to run around Westport sporting Nerf Guns and trying to assassinate their targets. It is the absolute opposite from the sturdy and rigid environment of school that we are all so ready to leave.

But in the midst of my excitement, while strategizing as to how I would assassinate my target, and, at the same time, avoid being shot, I never could have dreamed of how stressful AP Assassination would truly be.

I just don’t think I am cut out for the heavy pressures AP Assassination rests on students’ shoulders. I wish I was one of those kids who could tackle the burden of shooting their target, not getting assassinated, while at the same time living a normal life, but I’m just not. Instead, I’m just one of those kids who are true to themselves and knew they needed to stop when it was time to stop.