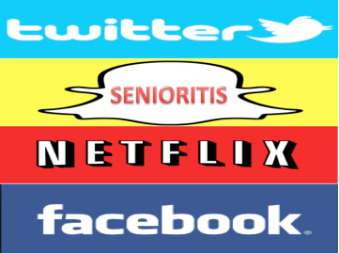 Many feel lucky that we are stepping out of the flu season at this time of year, but we are stepping into prime-time for a much more serious disease: senioritis. Washing your hands won’t save you, even if you’re careful not to share drinks it can be passed, and worst of all there is no cure.

It is said that the infected population, the seniors, suffer the most from this disease with a slow death of learning and serious symptoms such as Netflix binge watching, but it is undeniable that the disease is contagious.

Many unfortunate juniors give in to the temptation of slacking off when surrounded by unmotivated seniors in class, but the most tragic cases are the junior siblings.

Entering the most important two semesters of their high school career, this disease hits them at the least convenient time. Not only do these siblings suffer from an environment chock-full of de-motivation at school, but the laziness lugs its way home with them.

I can hear the cheers of college basketball roaring down the hallway from my senior brother’s room to mine. Mid-essay I’ll be bombarded with complaints of boredom and absurd questions, which not only makes it extremely difficult to focus, but reminds me of how I’d rather being doing anything than my homework.

It’s as if his lack of mental stamina magnifies my effort, making each math worksheet unbearable compared to the nap he’s taking. So you may think being in a class with a senior is difficult, but just remember you could be quarantined at home with a patient.