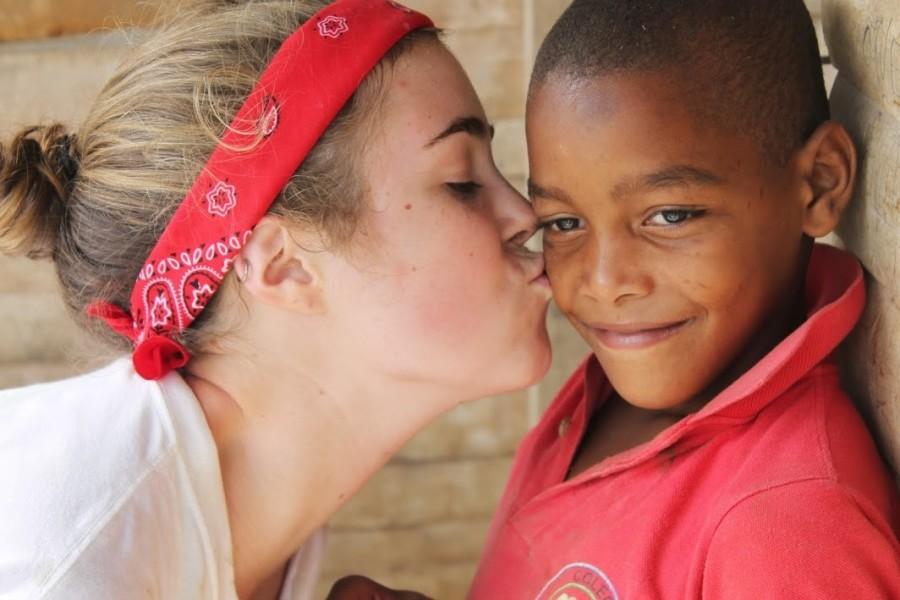 MAKING CONNECTIONS: Members from the group such as Charlotte Rowland ’14 make unbreakable bonds with the children from the Domincan Republic, while building bathrooms for their community. The group plans to continue their work during this February break in Guatemala to help more impoverished communities. Photos contributed by Caroline O’Kane ’16

If one were to look at Builders Beyond Borders (B3) member’s Facebook albums, they would see photos of members smiling as they stand in a home they were building, making funny faces with members of the community, and seemingly posing for hundreds of casual photos. Because of the silly nature of the photos, it is possible to get a false impression that B3 is all about fun and games. But under no circumstance should B3 be dismissed simply as a fluffy service group where students volunteer in order to enhance their college applications.

According to an article about Builders Beyond Borders by the Norwalk Hour, B3 will have contributed about 20,000 man hours of community service by the end of 2014. Of that time, 18,000 hours will have been spent in the Dominican Republic aiding communities in need, while 2,000 will have been spent volunteering locally.

In fact, last February, while I was relaxing at a beachside resort in the Dominican Republic, about 80 Builders Beyond Borders volunteers were in the same country, sleeping at schools or in tents. While I was skimming through a magazine by the pool, they were spending multiple hours each day completing strenuous volunteer work in the 90-degree heat.

The volunteer group has about 370 members, so their community service hour totals break down to about 54 hours per person per year. I blush to think that while I sat around attempting to watch as many “Gossip Girl” episodes as I could, B3 members were off volunteering their time and doing good for the world.

According to the B3 website, in La Berma, B3 teams constructed 20 prefabricated houses. In El Pomier, they installed 28 latrines and a 500-foot pipeline into the city. In Tio Fellin, B3 provided the community with latrines, benefitting all 55 families who were living there. In Paso De Moca, the B3 team built two water tanks and built 28 pit style latrines. Lastly, in Rio Grande Abajo, B3 partnered with a youth-based group, and constructed a much needed medical clinic and multi purpose building.

The work Builders Beyond Borders does is specialized to aid each community with what it needs most. All B3 projects share the common goal of helping improve the living conditions of those in need.

But B3 is not without a sense of fun. On the service trip there is time to hangout, take a field trip to the local beach and spend the last night in a hotel. But all of these activities are well-earned rewards for the incredibly hard work they do.

B3 service trips have a healthy balance of service and fun. While there is an immense amount of time and effort spent improving living conditions in all different parts of countries in need, the B3 group also encourages team bonding and makes the experience enjoyable. That doesn’t sound like fluff to me.