A pipeline to productivity 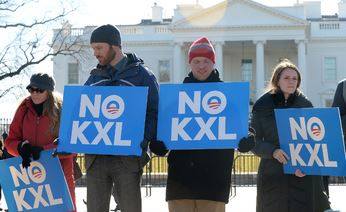 Hundreds of protesters have opposed the drilling of the Keystone XL pipeline. Photo courtesy of MCT Campus.

Congress finally (sort of) agreed on something! It’s too bad it’s something Americans don’t quite agree on. This week, the House of Representatives passed a bill that greenlighted the Keystone XL pipeline on a 270-152 vote.

For those of you scratching your heads wondering if Keystone XL is some knockoff product related to the beer brand, I’ll go ahead and clarify what it is at the risk of sounding like a rejected ecology teacher. The Keystone XL pipeline, unlike similar pipelines of its caliber, would refine gas from rare oil sands  in a manner that requires copious amounts of water and natural gas for steam.  It  extracts and transports fuel all the way from the south of our neighbor to the north, Canada, all the way through North Dakota, South Dakota and Nevada. The problem many people contend with this model is that it drains more resources than it extracts. You don’t need to get a five on the A.P. Environmental Science exam to realize that doesn’t sound too efficient.

Yet even as an environmentalist and a liberal  (big shocker considering that I’m a teenager in Westport), I have absolutely no problem with Keystone.  Sorry, my Democrat colleagues.

Let’s look at all Keystone can offer us. A pipeline of Keystone’s level is a massive undertaking but its return on investment is undeniable. Who are we, a nation in recession, to reject a project that would create 42,000 jobs for a foreseeable future? With a currently vicious, volatile commodities market, how can we reject a lifeline of 830,000 barrels of oil a day? Keystone would be a local, plentiful supply of energy  in a world where transporting gas is an expensive (and exceedingly dangerous) process. That is an extremely invaluable asset.

I’ll be the first to admit that a sprawling oil pipe isn’t nature-friendly and no, it isn’t an infinite output to be totally relied on. And I do consider myself an environmentalist. But I’m also a pragmatist; a pragmatist who sees that the progress of sustainable energy has been sluggish at best. We’re still mastering renewable fuels, and the reality is that transitioning to a green economy would most likely be a languid process that would take decades of continued research, modification and pitch-perfect adjustments. Also, consider that an influx of oil does not mean that environmental research will be slowed or stopped. If anything, both the taxed revenue of the mammoth XL project paired with its probable stimulation of the economy could be invested in more expensive yet farsighted options.

Keystone will complete its trip to the White House over the next few weeks and, yes, it will probably “earn” Obama’s veto. But, before the executive and the legislative branches get tangled into another spat, I just ask that everyone (yes, even you, my likely left-winger) consider Keystone. It’ll fuel hundreds of cars, scores of arguments and, hopefully, an improved economy. With the right amount of responsibility, and a few investments in the future, nature won’t do so badly either.