Save snow days for the summer 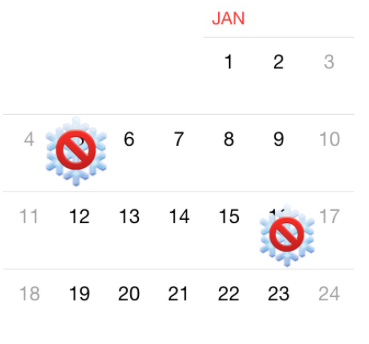 While most students scour the weather-reports searching for a possible glimmer of hope of a snow day, I see that little snowflake on my screen and pray for a false forecast or minimal accumulation. A snow day to me is just another impediment blocking the way to getting out of school for the summer.

As a former sleep-away camp attender, the idea of missing summer activities, because of school extending well into June, is high on my list of fears.

In years before, three snow days were built into the schedule, and once that amount was exceeded, more days were added on to the end of the year. Regardless of which snow policy—previous or current—the likelihood of getting out of school as soon as possible is virtually the same due to the ever-present possibility of snow up here in good ol’ New England.

The 2013-2014 school year was my worst nightmare. Due to the bounty of snow, all five days were used up. Not only was the school year maxed out, but a day of April break had to be subtracted in order to account for all of the snow days.

Those five allotted days off are like money I’m trying to save up. Sure, a snow day may feel like a nice surprise. It’s hard to find a person who doesn’t enjoy sleeping in and watching Netflix in bed. However, prematurely spending cash on small things hardly has as much satisfaction as saving up for the jackpot. Instead of having a few extra days to relax throughout the winter, I could be spending extra days in summer at the beach with a magazine in hand.

Winter is full of countless long-weekends and two school breaks. The closer it gets to summer, fewer and fewer days off exist. March has no days off, followed by a short April break and one long-weekend in May. Aside from those days off and a few possible others, from winter to summer break school is practically a straight run through.

Summer is the real goal, and all I can do to achieve it as quickly as possible is to try to convince people not to wear their pajamas inside-out or put spoons under their pillows.