Terrorism is rising, so is fear 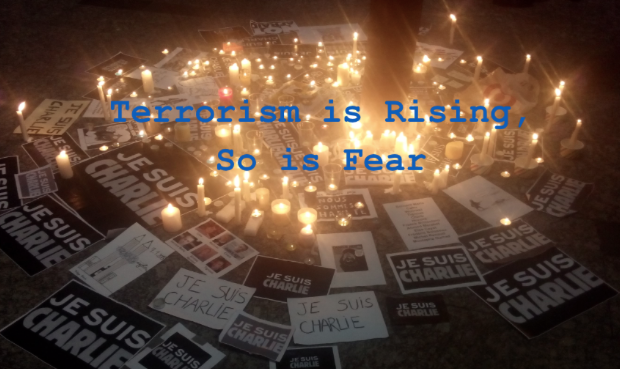 A few weeks ago, I was filled with fear, anger, and sadness during first period Advanced Journalism.

The class was talking about the very recent terrorist attack on the satirical French magazine headquarters in Paris, Charlie Hebdo. The attack, which killed 12 innocent people, was performed by members of a Yemeni branch of Al-Qaida. The attack was in response to a cartoon that mocked the Prophet Muhammad and a persistent mocking of the Islamic religion from the magazine. The attack instantly upset people all over the world, sparking vigils and city-walks in honor of those who died everywhere.

In April of 2010, a cartoonist named Molly Norris from Seattle, WA drew an “insulting” cartoon of Muhammad and started Everybody Draw Muhammed Day. Her cartoon was in protest of a website called RevolutionMuslim.com that threatened to kill the writers of “South Park” due to an episode that suposedly mocked the Prophet. She established this day to express the need for journalistic freedom and to fight back against Islamic extremists who base their lives off of instilling fear in others.

Molly Norris is one of many people standing up to Islamic extremism all around the world. People like her, people with courage, are essential to the safe community in which we live.

What kind of world do we live in where you can get brutally murdered for playfully mocking something through journalism?

Since the heart-wrenching 9/11 terrorist attacks from Al-Qaida, there have been over 2,400 deadly attacks from various Islamic extremist groups around the world. Most of these attacks have been upon other Muslim people within the Middle East. This number is not only staggering, but also frightening.

Islamic extremism kills more Muslims than any other religion, which is important for people to understand. Radical Islam murders it’s own people.

There is no doubt that radical Islam is rising. Just last month, an elementary school in Pakistan was attacked by the Tehrik-i-Taliban terrorist group. 132 children were murdered, along with 13 adults.

It seems as though everytime I turn on the news, I hear another story about people being brutally killed by terrorist groups. This issue is not only horrific, but it is consistent.

Before I go any farther, let me say this: It is so important to separate the individual from the religion.

What is important to understand is that the Islamic people who are committing barbaric acts of terror in the name of their religion need to be stopped. This is not about judging people, offending people, or feeling pity. This is about calling a spade a spade.

12 innocent people were murdered over a cartoon, and the first thing that I hear is, “Everybody is going to judge Islam now.”

Students need to be informed and need to discuss these issues at Staples. We not only need to be learning about the basis of terrorist issues, but the themes they underly. Living in a society that values tolerance of other religions is vital, no matter what side of the issue you’re on.