How badly do you want your license? 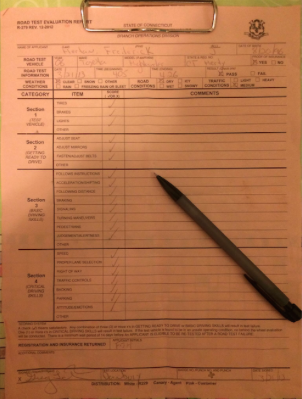 It’s comforting to glance at the white board in driver’s ed and see “97 percent passed!” posted in boastful red capital letters next to the latest license test date. But perhaps that statistic should be described as alarming rather than relaxing.

Yes, 100 percent passed means that the test will be relatively easy to pass for you, but it also means that it is easier for everyone else. Is it really worth letting ill-equipped drivers on the road in exchange for getting your license? Furthermore, what if you are an ill-equipped driver yourself?

There is even a $160 gap between the pricing of the two tests, which leads to speculation that customers are paying for an easier test.

Many people celebrate the fact that Driving School license tests are renowned for their easiness, especially in comparison to the DMV test because everyone, including myself, loves the freedom of driving. After 16 years, you are finally free of your parents accompanying you everywhere you go, which makes it tempting to want your license no matter what.

But a license is also a huge responsibility. According to the National Highway Traffic Safety Administration 45,586 vehicles were involved in fatal car crashes in 2012. Driving itself is dangerous, and being an ill-equipped driver makes the likelihood of an accident even higher.

After leaving the Driving School having passed my test the receptionist patted me on the back and said, “Make sure to tell all your friends about our super high passing rate.” However, not only do I not want to advertise the ‘super high passing rate’ and risk allowing more under qualified drivers on the road, it worries me that the driving school I got my license at is aware of their inflated passing rate.

It’s fantastic to have my license, but worrying if I’m underqualified every time I get behind a wheel is not.