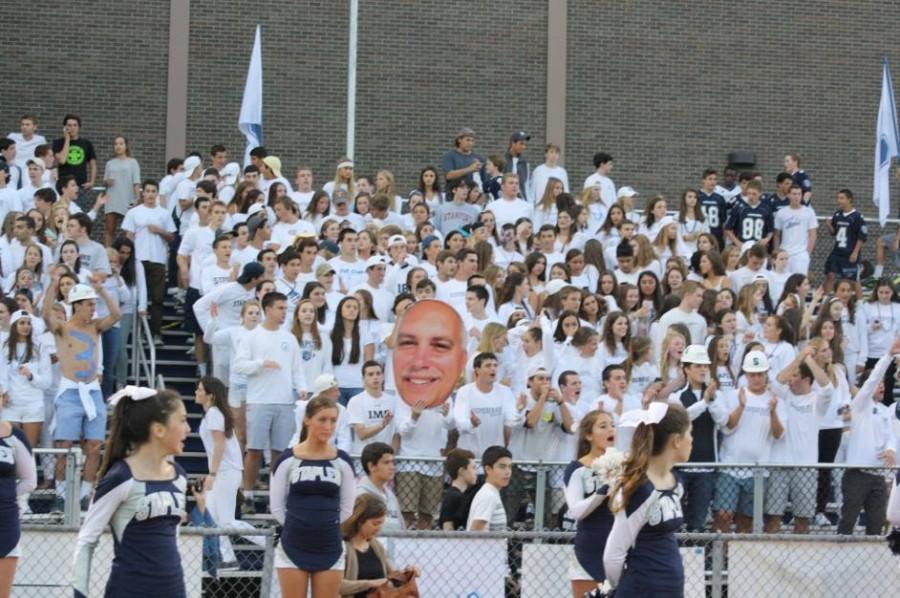 Superfans soak up the spirit at the annual white-out game. Photo by Griffin Thrush '15.

As I log onto my Facebook every night at around 7 p.m., I expect to see a couple of friendly notifications from my peers. You know, the normal stuff: somebody commenting on a photo or being tagged in a recent post. Soon enough, a button pops up on my screen. Somebody has posted in the Staples Superfans 2014-15 Facebook group.

I click on the link, expecting to find a cordial reminder to head over to the soccer game after school. What I get instead is a lengthy post telling me how disappointed the Superfans are in the entire Staples’ student body because not enough fans showed up to the football game. On Sept. 19, Superfan group administrator Greg Fisher posted: “There are 913 people in this group and considering Wilton is no more than 20 minutes away from the Fairfield edge of Westport its [sic] pretty pathetic that more of you didn’t show out.” What a travesty. Although school spirit is great, it seems as though every time I log onto Facebook, there’s another notification from the Superfans Facebook group saying that it’s not okay if I skip a football game on a Thursday night to do homework.

After the complaints from Superfans, threats are thrown around. A member of the group with the name of Paparo Isaac posted: “Best game played so far and you all missed it. Better be a good showing of people at the next home game.”

Don’t get me wrong, I’m all about school spirit, and the members and president of the Superfans Facebook group usually do a fantastic job of creating a fun atmosphere for students to support. I love going to football games and wearing white in support of the Wreckers.

Most of the time, administrators and members are in complete support of all the sports teams here at Staples. For example, girls’ varsity soccer had their FCIAC final game against Warde, and user Donald Griffin posted a supportive message: “Our girls soccer won, and they are moving on to the finals for the first time in many many many years, like a lot of years…would love to get twice the crowd this Wednesday at McMahon.”

Superfans member Jackson Lucas noted: “So far this year, we’ve had an incredi

ble fan section, and there’s no reason to not keep that going.” Those encouragements are what I think being a part of the Superfans Facebook group should be all about. Superfans should be supporting sports teams and encouraging kids to go to games. Seeing angry Facebook posts is not the ideal way to get me to head out to a football game. If the Facebook group became supportive 100 percent of the time, then maybe more kids would show up for some fun football under the lights. The supportive posts always get positive attention, so why not keep it that way all of the time?

Just like Donald Griffin once said: “A Superfan is an example of school spirit at any school event, even Avenue Q.”