How an Atheist feels about the Pledge of Allegiance 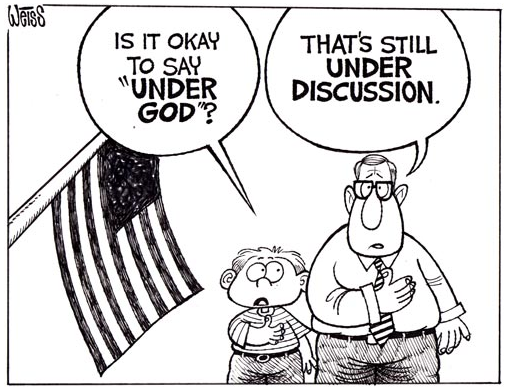 Everyone is familiar with the Pledge of Allegiance. We have aimlessly recited it almost every single day of school since Kindergarten, yet most of us do not understand fully what it means or why we say it. Many of us, however, do understand that we are pledging to a God that we may or may not believe in. I decided to do some research into an American document that is contradictory to the founding beliefs of our nation, a document that generalizes all citizens as believers in God.

The Pledge of Allegiance was created by Francis Bellamy in 1892 and there have been four changes made to it until the one we are familiar with today was put in place. In 1954, the most significant change was made: adding the two words “under God.” The first person to initiate this addition was an attorney from Illinois, Louis A. Bowman, who received an Award of Merit from the National Society of the Daughters of the American Revolution as the originator of this idea. On July 14, 1954, “under God” was officially incorporated into the pledge.

According to Randy Neugenbauer, the U.S. Representative for Texas’ nineteenth congressional district, “The Pledge of Allegiance reflects the truth that faith in God has played a significant role in America since the days of the founding of our country.”

I think that Neugenbauer has an interesting point, but for someone who identifies as an atheist, it is slightly uncomfortable for me to have to pledge to a God I don’t believe in morning after morning, without much of a choice.

Whether it is online, in the media, or in person, I am already dealing with more than enough religion shoved down my throat – distant relatives sharing photos on Facebook of how I need to “accept Jesus in my life,” the widespread representation of Christianity in the media (with little to none of Atheists) – and I should not have to feel that way at school. I stand up for the pledge each morning out of respect, but I usually do not recite it or put my hand over my heart. Other students agree that the pledge should be revised with the times.

The executive director of the American Humanist Association, Roy Speckhardt, claims that the Pledge “marginalizes atheists, agnostics, humanists and other non-atheists because it presents them as less patriotic, simply because they do not believe in God.” So, not only does the Pledge make certain atheists uncomfortable, but it also demeans their nationalism.

Speckhardt has also launched a national campaign encouraging Americans to “sit out” from the pledge until “under God” is removed. According to the Washington Post, “the campaign comes after a survey conducted by the organization found that 34 percent of Americans said they would like “under God” removed after being told it wasn’t part of the original text.”

For whatever reason, there are many people across the country who do not say the pledge. In order to appeal to the 13 percent of American citizens who identify as atheists, the Pledge of Allegiance should focus on our unity as a nation, not as any specific belief.