“F” is for friends who do stuff together 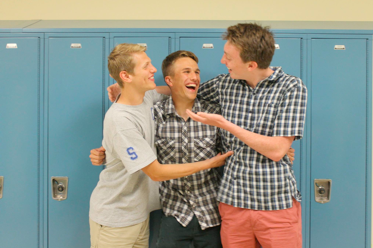 Four years ago, a group of then-seniors came into my freshman health class to speak to us. While most of what they said went in one ear and out the other as I daydreamed at my desk, something that one of them mentioned has managed to stick with me: “Just remember that high school is four years long – it’s going to feel like it’s flying by, but don’t underestimate how long that is.”

While it does seem like yesterday that I was a freshman walking these halls for the first time and gawking with fear at every senior guy with a beard, the truth is that I’ve changed immensely since that day (look no further than some of my old profile pictures on Facebook to see just how true that is). The time between that first day of high school and now this final one has been filled with its fair share of highs and lows, of memories I already know I’ll miss for the rest of my life and others that have already begun to fade.

With teachers and classes varying from year to year, the one constant that I’ve found has been my friends. Some of them have been by my side since the days of recess kickball, while others only joined the mix during my time at Staples. Regardless, all of us enjoy the bond that can only come from sharing the formative moments and milestones that define high school; from the first kisses, to the first girlfriends, to the first ex-girlfriends, to the proms, to the lethel final exams, and the all glory days on the sports fields in between.

No one remembers who the quarterback for the football team, who the head of Inklings was, or even who the valedictorian at Staples was ten years ago. No one except those in that class and their friends. The author Robert Penn Warren once said that there’s no one quite like a friend from your youth, someone who later in life will look at you and see you only as when you were young. While I’m not enough of a Debbie Downer to say that today represents any sort of final farewell, I’m not naive enough either to think that the circumstances of our friendships will ever again be what they once were within the friendly confines of these halls.

I must confess that this graduation does feel a bit like the rug is being snatched out from underneath us just as we are truly starting to gel with each other and get along. It still hasn’t sunk in that there won’t be any more lunches in the cafeteria, where most days I was able to look around the table and in every single person see a friend looking back at me. But this transition is supposed to happen. It’s time for us to move on to college and give the bond I mentioned before a little test in strength. It’s also time for us to move over and make room for a new class of freshman next fall, because it’s someone else’s turn to enjoy this wonderful place where friendships are made, laughs are shared, and, just maybe, a thing or two is learned.