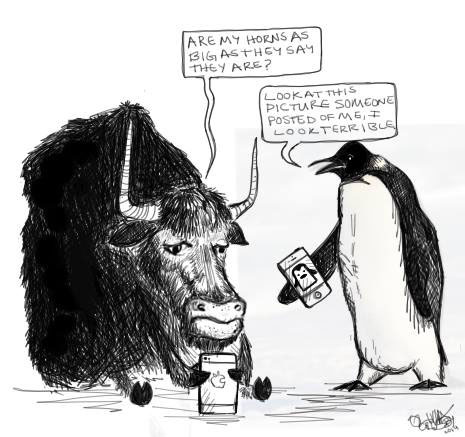 You don’t know me (except for you, Will Haskell! Well done, by the way. Your article has inspired much-needed conversation and participation from a Staples alumnus in the midst of writing her master’s thesis), but I only support the use of anonymity in service of sociopolitical hacktivism, so please allow me to introduce myself.

My name is Michelle Esteva, and, for the majority of my senior year at Staples, I was Editor-in-Chief of Inklings. Before that, I was bullied.

I started at Staples with a folder full of hand-drawn cartoons and zero social aspirations. Despite my predilection for library lunches and party-of-one weekends, I couldn’t evade high school’s insistent clichés.  Many of those came in the form of text messages—the original “thing”—typed on 19th-century keyboards with cushiony buttons. I can still picture my flip-phone’s tiny green screen and the crude black font that warned: “Some older girls want to kick the shit out of you.”

The next day, one of them shoved me in the hallway. I don’t remember her name, but my present self thanks her for allowing me to appreciate Mean Girls on a more ironic level than most of my friends. Ah, memories. Was it Maya Angelou who said, “People will forget what you say, but they will never forget how you made them feel”? I think I read that on a random Instagram account and it’s half true.

I bought my first iPhone as a freshman in college, when the word “app” was a memetic murmur amongst techies. I’d be impressed by your aptitude (pun retroactively intended), if I wasn’t ashamed.

After you graduate and start to talk to different sorts of people face-to-face, Where’d you grow up? is a bankable icebreaker. Even if you’re a native New Yorker who was relocated to the suburbs against her pre-adolescent will, you have to answer Westport. For me, that response most often elicits a single eyebrow raise and the occasional chortle followed by a drawn-out ooh. Great education, you’ll sigh as you maneuver to another topic.

Well, not so much anymore. When you’re sitting in Central Park and you overhear an adjacent table of strangers blasting your high school for making suicide jokes on a public platform, you know you’re no longer getting away with a deflective response strategy. Thanks, guys. But, in all seriousness, nobody should be embarrassed to admit where they spent their formative years—especially Staples students.

With great privilege comes great expectation. Do I sound like Peter Parker’s uncle with a dash of Dickens? Good. I trust that the administration’s behavioral psychologist team is figuring out how to address whatever cocktail of sublimated insecurities led you to spew unwarranted hate vomit, but you don’t need that noise, do you? Nah. You’re smart humans. And that’s an understatement. You’re better educated and cared for than most of the people on this planet, let alone the next town over.

So why do you collectively insist that the place where you spend the majority of your time be a hellish zoo of built and virtual torture chambers? Before Mr. Haskell’s piece, New York Magazine published its January 2013 cover story on the trauma that is the American high school experience. In it, Rutgers sociologist Keith Hampton suggests, “Before Facebook, there was a real discontinuity between our high-school selves and the rest of our lives…Social ties that would have gone dormant now remain accessible over time, and all the time.”

Are you ready to code regret into the emotional DNA of your future selves? One day, you’ll be using apps to order fair trade baby wipes and send money to hurricane victims, or something. It gets better, but you won’t escape how bad it got.