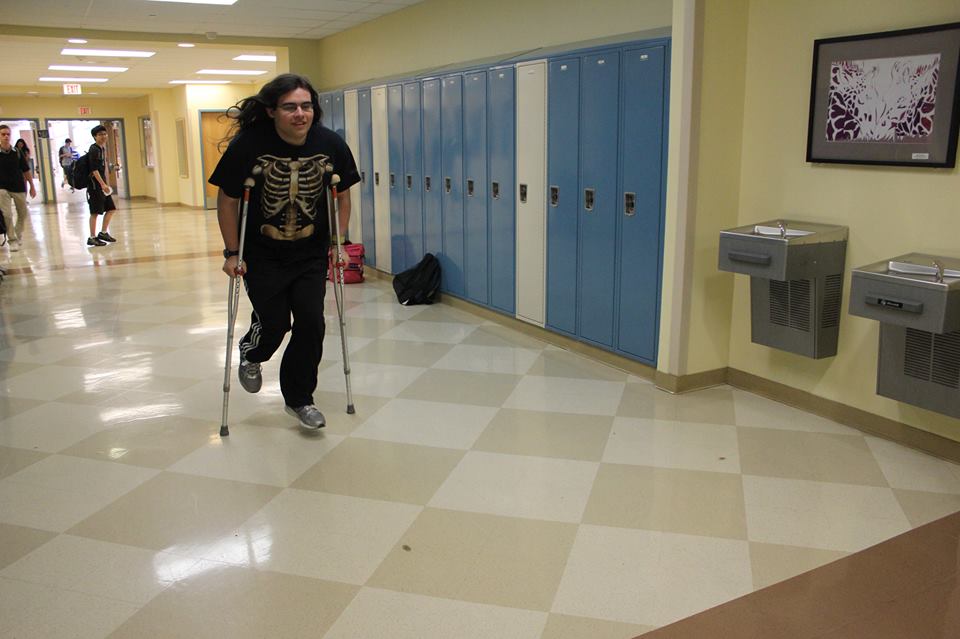 If crutching were an Olympic sport, I’d win gold easily. This is the fourth time I’ve been on crutches, so I’m practically a professional crutcher.

In fact, one time, I crutched two miles twice in the same day.

Which is why, when I got injured and was put back on crutches, I stayed positive. For example, without the crutches, people might not ask about my injury, and then I would not get to tell of my heroic actions.

But with crutches—BAM—instant conversation starter: “Oh, Ben, what happened to your leg?”

“Oh, you know,” I respond, “I sprained it saving 200 orphans when the orphanage caught fire.”

Some people actually believe that story, and those who don’t fall into a fit of laughter. So, I do get some benefits; it sure is fun telling that story.

Then people ask what actually happened. If they didn’t laugh the first time, they usually laugh when I tell them I sprained it playing ultimate frisbee and that my alleged heroism was actually just my own clumsiness.

But there are some other benefits for having crutches besides getting to tell a good tale. You can move pretty quickly on crutches if you know what you’re doing. The day that I crutched two miles twice was the fourth of July the year after I was in fifth grade. My family and I had a tradition of walking down to Compo Beach and back to watch the fireworks, and my crutches weren’t going to stop me from seeing the show that year.

While you might think I lagged behind, hobbling along on my crutches, the truth is that I beat my family home that year. Me, on crutches. I practically flew.

It’s not hard to crutch quickly. Crutches out first. Then, swing your body through, putting your weight on the crutches. Land on your uninjured leg; do a short jump for momentum; land on your good leg again with your crutches out in front of you again.

Speed crutching is actually one of the best parts of being on crutches. It’s basically like jump roping, except you use only one leg and you go forward rather than stay in one place.

Speed crutching is a bit harder in the halls of Staples, when you often get caught behind a gaggle of freshman girls who have their eyes glued to their phones.

Then, all I can do is imagine the sound of a car horn—BEEP! BEEP!—and continue on at a mile-an-hour pace.

But I did get to take a “magical mystery tour” of the school elevator. I thought it would be an exciting prospect—until I actually rose in. That Thyssenkrupp elevator was more of a Thyssencrapp elevator. I can’t imagine who would win in a race between the elevator and the freshman girls.

Still, it was a great way to meet new  fellow injured people. My fellow crutchers and I have since formed a Secret Order of the Elevator—wait, I’m not supposed to tell non-crutchers about that!

Ugh. Now you know about our Secret Order of the Elevator. There’s only one thing I can do now to right my crime of telling a non-crutcher about our Order.

It looks like I’m going to have to break your leg.