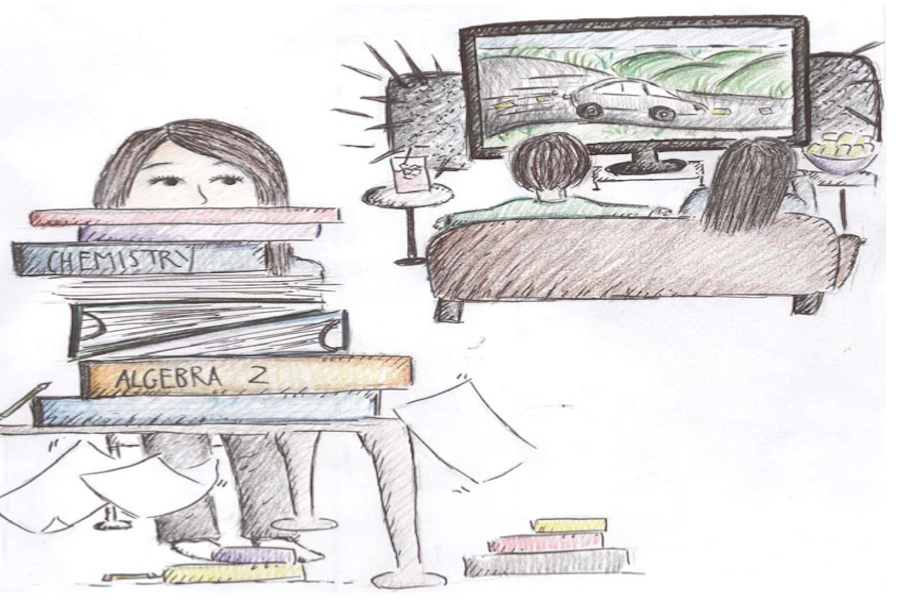 In my family two is the magic number: it is the month that four of the five family members were born in and the number of dogs we have. And, finally, the number of second semester seniors who live under our roof.

Growing up as a younger sister to twins I have learned the good and bad that come with the job: because of the two of them, I know a bigger portion of upperclassmen in the halls. I also know the “5 steps to a 5” on the AP Biology test.

But with their talk of APs and the college applications coming to a close, the wrath of the older twins has ventured to another side of the spectrum; just when I start to buckle down with my grades and my future, they are full speed ahead on the ride of their high school lives: second semester.

And because the majority of the kids in my household are second semester seniors, my parents can sometimes forget what it was like before, when the days were not filled with after-school lunches and Netflix marathons.

By February, their being on time to school became less likely than finding an empty sandwich line at lunch. Well, at least that is how it rolls in my house. And no matter how many times I can yell at them to get up, or even get my parents involved, there is just no hope that I can make it to first period on time. These past couple of months I have grown extremely thankful for my teachers who don’t count a tardy at 7:33, because if they did, I would have started to lose credit weeks ago.

I have yet to figure out what causes my siblings to wake up at 7 when we need to leave at 7:10, but I am sure that it is not the loads of homework they are piled with night after night.  Maybe it is that somehow, somewhere, they were told that their attendance is voided just because they are seniors. Well, if that is a true statement, then I am sorry because the gift is not extended down to your sophomore sister. My teachers still count tardiness and there is no “second semester sophomore” excuse that I can use, so we still need to get to school on time for my sake.

According to the Department of Pediatrics at the University of Iowa Children’s Hospital, “The average twelve to seventeen-year-old watches about 23 hours of TV per week.” However, I believe that second semester seniors bring that average way up for the rest of us working students.

But there are two different issues with the countless hours of watching television as a second semester senior, and each issue is equally yet uniquely annoying to the sophomore across the hall.

First there is that feeling of despair as I look across the hall, while slaving away at 30 exponent problems, only to see the computer in my sibling’s room open to Netflix playing a new season of “Dawson’s Creek.”

Then there is the trouble with live TV. This means my second semester siblings inviting four or five friends over to watch “Pretty Little Liars” every Tuesday night at 8 p.m. Because it doesn’t matter if I have to study a new tense in Spanish, or complete stoichiometry practice problems: the people downstairs on my couch luring me in to the television set with their voices and conversations about the upcoming episode are stronger and more successful than my history teacher posting my homework on Blackboard and saying it is due in the upcoming class.

Either that, or I just can’t get my homework done because of shrieks and screams after every new note from ‘A’. But either way, no mom, I cannot invite all of my friends over to watch TV on a Tuesday night, I am not a second semester senior, and I have things to do.

There is not one senior who can carry all of these symptoms of senioritis in their cartoon character backpack. Some have only one free but still watch countless seasons of TV shows each week; some go out on weeknights but are on time to school. But that is why the trouble is double – take a second semester senior, and then make sure he or she has a twin. And if those twins are your older siblings, like me, then find me so that we can be allies in the fight against senioritis, because with two second semester seniors, they automatically win any battle against me, the one working sophomore.