Eight Is The Magic Number 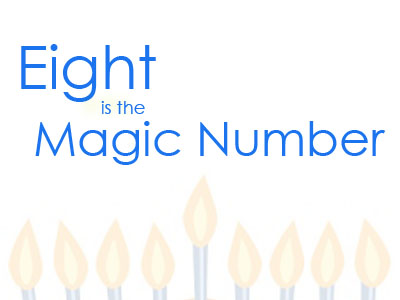 When I was younger, I wanted to celebrate Christmas. How could you blame me? Santa Claus, cookies, stockings—and it’s no secret that kids get far more presents on Christmas than we do during Hanukkah. Christians get presents both under a tree and in a sock! My parents would get so mad because, being the Jewish parents that they are, they wanted me to enjoy the Jewish holidays. It took me a while, but as I’ve grown older, I’ve started to appreciate the true value of Hanukkah. Now I can’t wait until December, when I get to have eight nights of fun. Come on, how awesome is that—eight nights!

For people who don’t know, Hanukkah—also known as the Festival of Lights—is the commemoration of a true miracle. When the Maccabees, a small group of Jewish rebels, regained control of the Jewish Temple from the Greek army, they found a small amount of oil (one day’s worth) to light the menorah in the temple. Remarkably, the menorah lasted eight full days. Now, we light an additional candle on the menorah each night to represent the eight days that the oil burned.

There’s one thing that comes to mind every time I think of Hanukkah: tradition. For example, each year, we celebrate with gelt— chocolate circles wrapped in gold foil that are supposed to look like money. That’s right, on Hanukkah, I get to play with chocolate money. Every night!

Specifically, gelt is used in a game called Dreidel, when one spins a four-sided top, and, depending on the side that it lands on, one either gains or loses gelt. Too fun.

In my family, we have huge Hanukkah meals, starting off with challah, a light, sweet, doughy bread that is—now that I think about it—the most delicious thing in the world.

Challah is followed by a big main course like a brisket, with a side of kugel, a casserole of sorts with egg noodles, butter, cinnamon, apple, corn flakes, and more. Suffice it to say, the food can’t get any better.

We always end with a big dessert. My family usually has cupcakes or cake, but the traditional desserts, like donuts and donut holes, are all—understandably— oil-based.

Now, I know I’ve really only talked about the material stuff, but what I’m most excited for about Hanukkah is the time I get to spend with my family. Being a teenager, I sometimes forget about how much fun my family really is as well as just how enjoyable it is to spend time with them.

This year, I am looking forward to another holiday filled with traditions, fun and truly enjoyable family time.