Don't Throw Israel Under the Bus 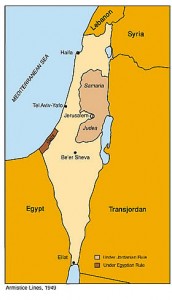 The borders of Israel before the 1967 "Six Day War"

I am both a Jew and a person who in general is pro Israel. However, when it comes to president Obama’s declaration that Israel should return to its pre 1967 borders, I could honestly say that I would disprove of this action regardless of my background.

Obama believes that returning the land Israel has gained since 1967 will help to create peace in the Middle East. This could not be farther from the truth. Hamas, the organization that governs Palestinians in the Gaza Strip and the West Bank, is a terrorist group. This is not my own label; the U.S. has classified Hamas as such. This group has relentlessly attacked Israelis with rockets and suicide bombers. Returning land to Hamas is dealing with a terrorist organization, something that both the U.S. and Israel are sternly opposed to.

Even more to the point is the fact that Israel has given land to Hamas in the past and the results were far from beneficial. In 2005 Israel gave up the Gaza Strip to Hamas and this area was immediately militarized. Instead of creating peace, it led to more violence. The same would happen to any land given by Israel to the Palestinians.

The idea that this returning of land could lead to peace is utterly impossible due to the fact that Hamas and Palestinians refuse to recognize Israel as a country. These organizations are not looking to make peace, they are looking to annihilate Israel. There is no benefit whatsoever for Israel or peace in general in returning this land.
Another aspect that is essential to consider is that all of the land that Israel has gained since independence in 1948 has been as a result of retaliatory fighting.

For example, much of the land that Israel has gained was a result of the 1967 six day war, where On May 19, 1967, Egypt kicked U.N. emergency forces out of Egypt, closed the Suez Canal and Straits of Tiran to Israeli shipping, deployed 100,000 Egyptian soldiers to the Sinai Peninsula and, with Jordan, created a mutual defense agreement against Israel. The land that Israel has gained was not won without reason. It was rightfully taken because of violence against Israel.

Something must also be said for the sake of loyalty. Israel has been our ally and supported us in many times of need. Obama, instead of supporting our ally, has, to quote potential GOP presidential candidate Mitt Romney, “thrown Israel under the bus.”

Click here to read a different viewpoint by Mel Mignucci ’12