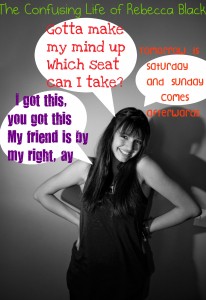 Thirteen-year-old Rebecca Black and her music video have gone viral on YouTube. |Graphic by Cheyenne Haslett '13

The most important thing you need to realize about Rebecca Black’s “Friday” is that it’s not the song you love to hate as much as it’s the song you hate to love.

Admit it, you’ve gone to YouTube ten, twenty, thirty times, claiming that the song is lame, but you know every lyric, don’t you? Face it, you can’t get it out of your head now that I’ve spoken about it for a few seconds: “Gotta get down on Friday! Everybody’s looking forward to the weekend.” Try to stop humming, I dare you.

But don’t worry, you’re not alone. At the time I’m writing this, the YouTube music video for the song has gotten over 40 million hits. By the time you read this, it’ll probably be over 100 million.

For those of you who have been hiding under a rock the past couple of weeks, Rebecca Black, 13, is a girl from Anaheim, Calif., who received a birthday present of getting to make an amateur music video of her and her friends recording an original song about partying on the weekend (ask yourself, if you got that as a birthday gift, wouldn’t you jump at it?). The resulting video, produced by Ark Music Factory, was innocently enough posted on Youtube for a close group of friends to view. Little did Rebecca know that it would be picked up by the Tosh.O comedy show on E! Television.

YouTubers everywhere called it the worst music video of all time. One comment on YouTube even said, “I hope you cut yourself.” Arm chair critics around the country high-fived as they denigrated the young wannabe pop star.

Turns out the joke was on them. Within a week after the video went viral, Black became a member of the darling of pop culture elite. Simon Cowell even called her a genius for her song! Before you know it, Nick Jonas sang her lyrics at a fundraising event. Ryan Seacrest set her up a Twitter account. Lady GaGa is even publicly commended her.

More to the point, the iTunes version of the song, deemed to be the most stupid and worst song ever recorded, is earning Rebecca approximately $25,000 a week.

Okay, I’ll say it, I resisted at first. I made jokes about it with all my friends and would mockingly hum the tune.

Next thing you know, Friday morning comes along and I find myself tapping my foot in Algebra. It’s stuck in my head and it won’t go away. All the lyrics are flowing through my brain like an unstoppable force.

There is something infectious the song. Is it the repetitive lyrics? Could it be the unoriginal harmony? Or maybe it’s just the fact that someone is finally stating the obvious and no one wants to look away.

Let’s get real, who really doesn’t love Friday? Anyone? There’s a restaurant dedicated to Friday, so can’t a little girl sing about it?

Maybe this is just another Internet meme, but at this point in my life, I’ve never been so excited for Friday until Rebecca Black came along.