Sprit Week (Minus the Spirit) 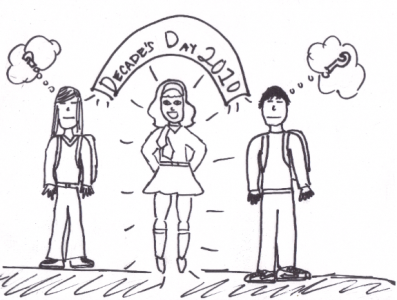 Every year the week before homecoming, Staples has a “spirit week.” The purpose of this is to bring the school together and create a sense of community in a fun way.

There’s something about being a senior that makes the week all the more special. We are now the head of the school. The leaders. The “top dogs.” So by participating in spirit week, we’re representing the pride and love we have for Staples.

However during this year’s spirit week, there wasn’t much spirit at all.

The weekend before I was so excited I picked out all my costumes. But when I walked in on Monday into the cafeteria, no one else was dressed as a superhero.

I had to walk around the rest of the day with a dumb cape on that I made out of a tablecloth. And when I walked down the halls everyone looked at me like I was an outcast.

The same theme continued until Thursday. Out of my 25-person math class, about 3 would dress up every day.

Needless to say, I was disappointed in spirit week. I really don’t understand why people in Staples wouldn’t want to participate.

I don’t think the reason though is because they lack spirit. I believe the majority of students actually like going to Staples. However, I do believe people think they are “above” spirit week or are “too cool” for it.

Guys don’t dress up because they claim it’s “too girly.” What is girly about college apparel day?

And girls don’t dress up because they don’t want to come to school “looking stupid.”

Honestly, I think that if you don’t dress up then you really look stupid. I looked cool that week. And so did everyone else who participated.