Global events of May 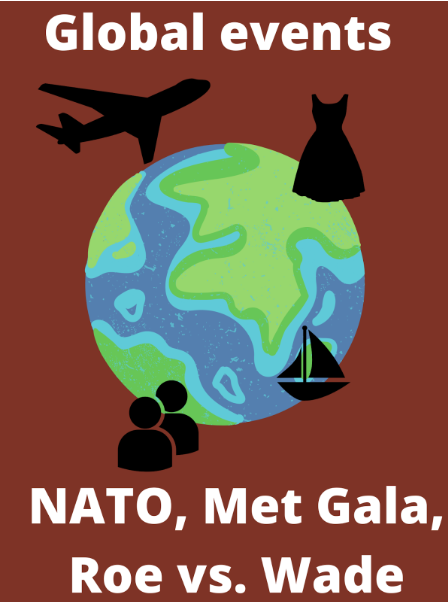 People live as new events impact the world everyday, such as Finland and Sweden applying to join NATO, the 2022 Met Gala and the Roe v. Wade draft leak.

Finland and Sweden applied to NATO on May 18 regardless of “serious consequences” from Russia.

“Greater unity against countries that are more openly authoritarian is good,” Jacob Friedman ’22 said. “I also recognize that in the past neutral countries have been safe havens for refugees”

Turkey blocked the countries’ proposals, citing that Finland and Sweden are harboring Kurdish militant groups which Turkey considers terrorist organizations. Talks will continue, as a unanimous vote is needed for the countries to join. Many think their membership is important.

“[Russia] does not want Ukraine to control its own destiny,” Friedman said. “So to see other countries standing up against that specific instance is very valuable.”

The Roe v. Wade draft, leaked by Politico on May 2 and later authenticated by the court, reads to overturn the federal protection of abortion rights, allowing states to decide their own policies.

“[Roe was] egregiously wrong from the start,” Samula Alito, Associate Justice of the Supreme Court writes in the document. “[It] must be overruled.”

The decision will not be final until a published document is released, most likely in the next two months. Meanwhile, some states are moving against abortion, causing protests.

“It really should be between a woman and her doctor and what she personally believes in,” Lili Aldrige ’22 said, “rather than anybody else influencing that decision.”

The Metropolitan Museum of Art’s 2022 exhibition displays “In America: An Anthology of Fashion,” with this year’s dress code for the Met Gala being Gilded Glamor. The event was hosted by Regina King, Blake Lively, Ryan Reynolds and Lin-Manuel Miranda, on May 2. Many of the outfits were disappointing to viewers as they believe guests didn’t follow the dress code.

“Sebastian [Stan] really bombed his look because it did not match the theme at all,” Anna Kercher ’25 said.

For the first time in two years, 600 people attended, including celebrities such as Kim Kardashian, SZA and Jack Harlow. Some celebrities wore looks from the mid-1900s, receiving criticism.