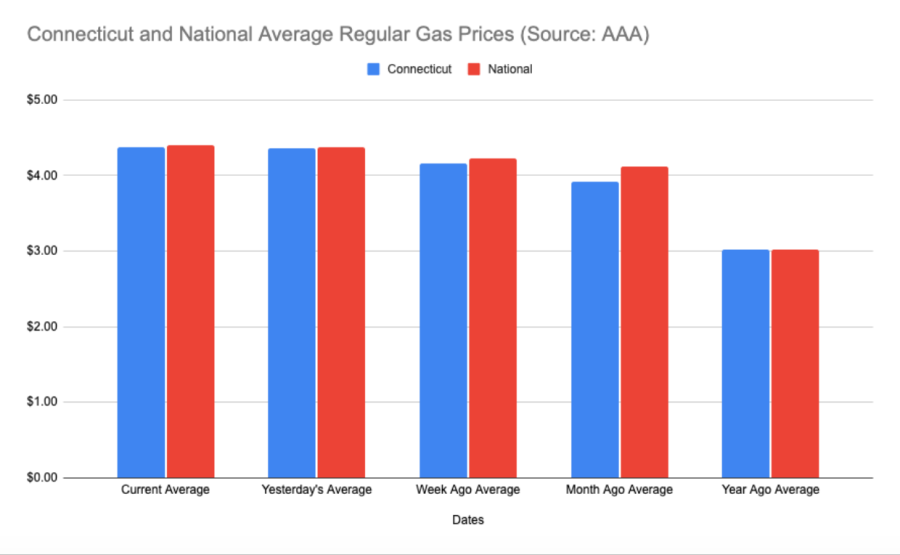 As the price of regular unleaded gas rises nationally, prices in Connecticut rise as well.

Average gas prices hit record highs in Connecticut on Wednesday May 11, as diesel gas reached an all-time high of $6.325 and unleaded regular hit $4.371, according to AAA.

According to GasBuddy.com, this comes after a brief fall in gas prices from March 11 to April 15 that many thought would continue.

“When the gas prices started to decline,” Max Goldenberg ’22 said, “I thought that it would keep going down and eventually return to a somewhat normal price.”

This prediction did not hold true, however, as gas prices began to shoot back up, eventually hitting similar highs to the March 11 high of $4.486 on average for unleaded regular gas.

Governor Ned Lamont responded to this gas crisis by signing House Bill 5501, emergency legislation that suspends Connecticut’s excise tax of 25 cents per gallon of gasoline from April 1, 2022, to June 30, 2022. This legislation was successful in briefly lowering gas prices.

“I was very happy when they cut the tax,” Staples Librarian Nicole Moeller said. “That was big for my savings.”

The 2023 budget adjustment bill, signed on Monday by Lamont, will continue this tax break to November 30. Despite this tax cut, prices still continue to climb.

According to an article by CBS News, the increase in prices is due to the demand spike from COVID-19, cuts to oil production from OPEC countries and international sanctions on Russian oil. Many Staples students have had trouble affording this growth in gas prices as well.