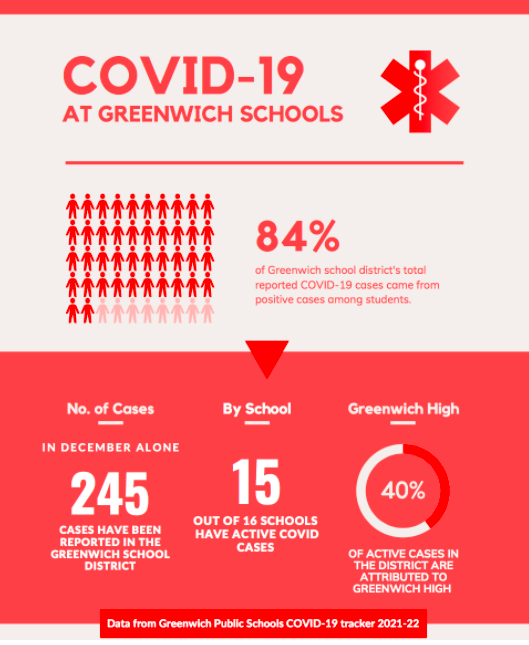 Greenwich High School began winter break two days early due to a dramatic increase in the number of positive COVID-19 cases among students and staff.

Superintendent Toni Jones of Greenwich Public Schools announced on Dec. 21 that Greenwich High School would begin December break early due to a dramatic rise in COVID-19 cases within the school district. Of the 114 cases reported this week, the district’s online tracker reports 70 active cases among Greenwich High students and staff.

The news of an early closure arrives in the wake of a previously record-setting 64 active cases reported on Dec. 17. In the month of December, the number of cases across all Greenwich Public Schools has surpassed 245, accounting for roughly 60% of the school year’s total cases.

“GHS will be the only school officially starting the December recess,” Jones wrote in an email to Greenwich Public School staff and families. “The district will continue to monitor all of our other buildings. We do not take this decision lightly, as we know how important it is for families who rely on our schools to be open.”

The two days Greenwich High students will miss will be added to the end of the calendar after attempts to pursue online learning were not reinstated by the state.

“There were numerous attempts made over the past two days to gain permission from the Connecticut State Department of Education or Governor to allow us the decision-making power to be remote so that the days would count instructionally if needed,” Jones wrote. “However, as of this evening, nothing has been granted.”

The announcement of Greenwich High’s early foreclosure has prompted discussion among students concerning the rise of COVID-19 cases within schools.

“I think this is specific to winter and people going to travel,” Zach Bishop ’22 said. “I don’t think it foretells that we will revert to online learning or stay home.”

Although remote learning is not an option within both the Greenwich and Westport school districts, Zachary Rybchin ’22 asserts an alternative should be presented in the event cases continue to increase.