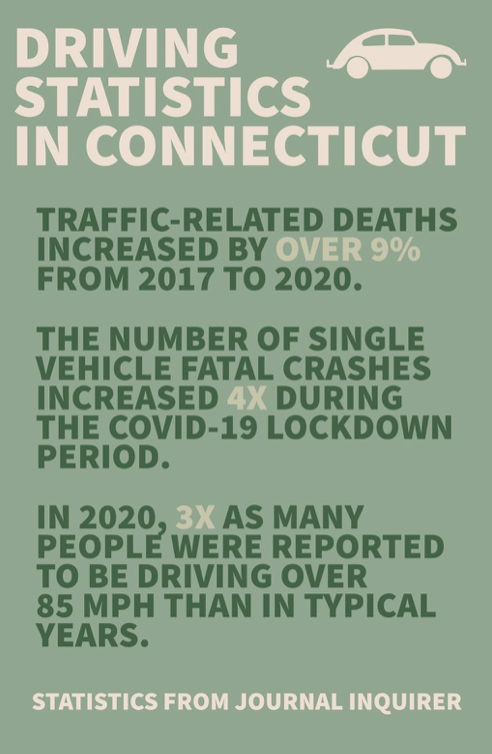 According to the National Highway Traffic Safety Administration, driving behaviors changed significantly throughout the course of the pandemic. Speeding rates increased dramatically and still have not returned to normal levels.

Connecticut has recently experienced a 16% increase in traffic-related deaths, indicated by data from the state Department of Transportation.

Although traffic-deaths statewide have increased throughout the pandemic, this trend is not as applicable to Westport.

However, Wolf noted that there has been a noticeable increase in traffic throughout town as a result of the pandemic, which may inspire drivers to speed. In addition, an increase in traffic may have negative repercussions on not only drivers’ mood, but also the state as a whole.

“[Traffic] doesn’t put you in the right mood,” social studies teacher Jonathan Shepro said. “I think traffic is bad for the environment, I think [traffic] is bad economically and I think it is bad mentally. I think it really needs to be looked at in a more serious way as not just an inconvenience, but as something that is really impacting the nation in a negative way.”

The Department of Transportation reasons that the surge in deaths statewide is due to speeding, which, according to Wolf, stands true in Westport in terms of threatening drivers’ safety.

“If you’ve got more speeders on the road–people who aren’t driving as carefully as they should be–they create a greater danger to inexperienced drivers, who have less of an ability to react,” Wolf said.

“Inexperienced drivers” as described by Wolf include teenagers who have only recently obtained their license. Data from the Centers for Disease Control and Prevention signify that crash risk is especially high during the first months of having a license, and the crash rate per mile driven is about one and a half times as high for drivers who are 16 years old as it is for 18 or 19 year old drivers.