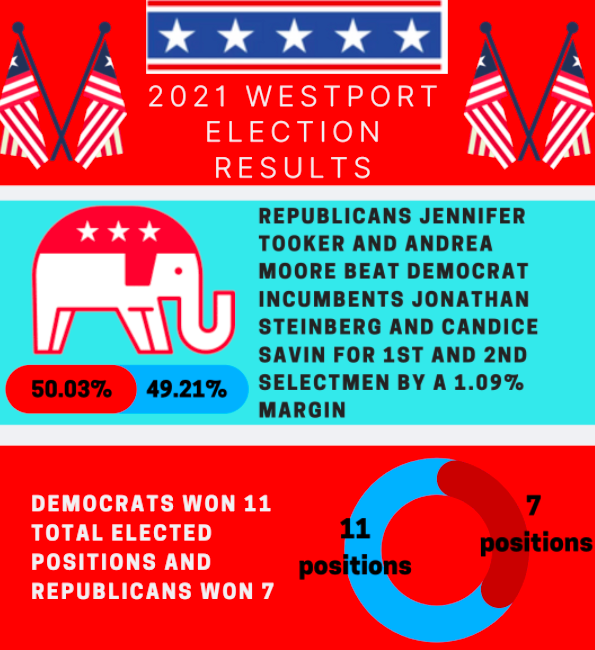 Republican candidates Jennifer Tooker and Andrea Moore became Westport’s First and Second Selectwomen, defeating the Democratic First Selectman incumbent Jonathan Steinberg, who represented Westport for six terms as the second-longest serving State Representative in the history of the 136th district, and his running mate Candice Savin, who had served since November 2019. Libertarian candidates TJ Eglin and Louis D’Onofrio were also on the ballot.

“We spent a seven month campaign meeting Westporters and learning what their priorities are,” Moore said. “We live in a wonderful town and our first priority will be making sure Westport remains a terrific place to live, work and play.”

The election results were close, with Tooker and Moore winning by a 1.09% margin with 4,237 votes, as compared to Steinberg and Savin’s 4,168 votes. They ran with an emphasis on bringing proven leadership and fresh perspectives to town government, hoping to help Westport not only recover but prosper during the pandemic, focusing on health, education, infrastructure and town services.

“Our first order of business will be meeting with all the department heads to get updates and have the best understanding of the drivers, issues and opportunities in each area,” Moore said. “We will make sure we lead with compassion, integrity and professionalism.”

“We are so grateful to all of you who volunteered, hosted events and contributed to our campaign,” says a Nov. 2 post on their instagram page, steinbergsavinforwestport. “Regardless of the outcome, we are still committed to making Westport better than ever.”

Some Staples seniors who have recently turned 18 voted at the polls for the first time. Teagan Church ’22 felt particularly excited to vote, as she was able to help vote her mom into office as a first-time member of the Westport Representative Town Meeting board.

“I’ve always loved local government and sometimes it impacts daily life far more than larger state or federal government,” Church said. “The current town-wide controversy with CRT and education curriculum directly impacts me and my peers as students, so voting on leadership who will impact the results of that controversy is very appealing.”