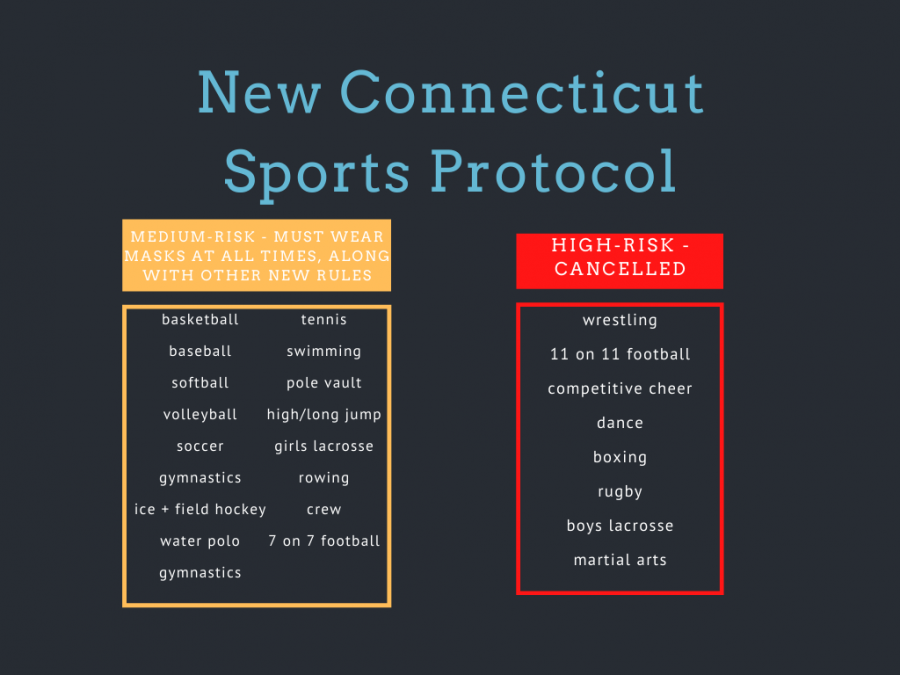 Those sports that were cancelled include wrestling, boys’ lacrosse and rugby, among several others.

This decision will also lead to the premature ending of the independent football league that Staples has played in.

“I understand [why] the decision [was made] but it still really sucks to not have an official end to the already shortened season,” Toby Obinwanne ’23, who plays Staples football, said.

Additionally, sports determined to be a “medium-risk”, such as basketball, baseball, squash and others have also changed. All players will be required to wear a face covering and state youth teams will no longer be allowed to travel out of state.

“[Currently], we are maxed at three people per court,” Staples’ squash player Rebecca Schussheim ’23 said. “There are [also] no regulations about wearing masks while playing. Also, [Staples] may end up only playing a few other teams rather than the entire league.”

These changes came on the heels of CIAC announcing that the winter sports season’s start would be postponed indefinitely, with no new start date given as of Nov. 9.

“We are just being realistic about the time frames that we have, we do anticipate having updated guidance from DPH shortly,” CIAC Executive Director Glen Lungarini told WTNH.

Both of these, the delay of the winter season and the new cancellations and changes made to all sports, are coming on the heels of a widespread uptick in COVID-19 cases in Connecticut and concerns over an outbreak happening in a game, especially ones that involve close contact.

“We have seen a lot of infections in and around sports, in and around hockey,” Lamont said during his announcement. “If your team is going to be playing we would like to know who is on the roster and how we can contact them if there is an infection. “